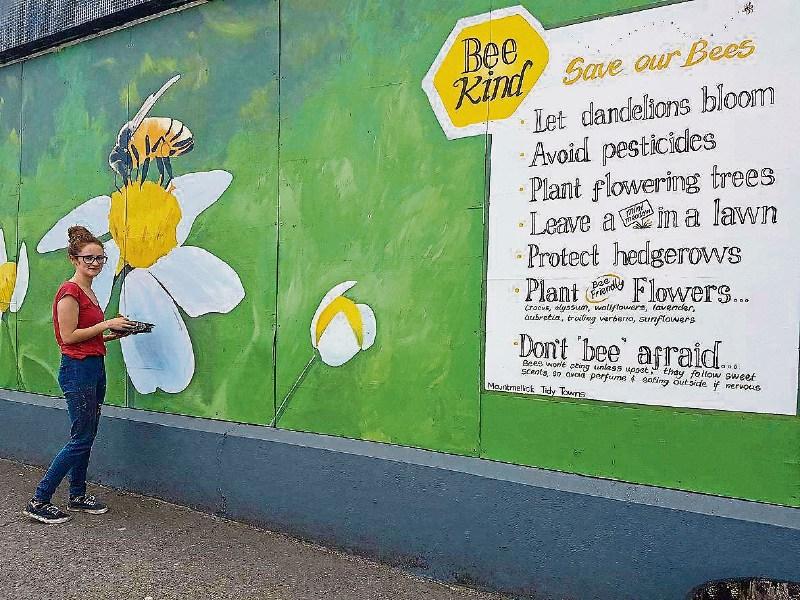 A vacant garage in Mountmellick, once a site of vandalism and break-ins, is getting a bright makeover by Tidy Towns volunteers, including colourful murals.

The garage on Emmet street is in a prominent spot for passing traffic, but is vacant since 2011 after it closed.

It was boarded up in 2014 after repeated break-ins and vandalism prompted local calls to make it secure.

They were happy to help.

“The Tidy Towns committee do brilliant work in our town, they are always out sweeping, weeding and planting to make it pretty. I offered to help as I have experience in mural painting, and I was delighted when they took me up on it, and gave me free rein,” said Lynda.

Her ‘Bee Kind’ mural could help the committee win cash, with €9,000 in prizes in a national tidy towns competition to encourage pollinators like native Irish bees, under threat of extinction.

Meanwhile Courtney has begun a colourful 'sun' mural on another window, with vacant houses belonging to the site, to get 'faux windows'.

Tidy Town chairperson Kitty Creighton welcomed the murals, which the group has complimented with a fresh coat of paint on the garage and petrol pumps.

“It has given a great boost to that end of the town, both for the residents who were looking across at the garage, and for the public driving by,” she said.

The small group has big plans before Tidy Towns judges visit after June 11.

“We are doing projects on approach roads including a wildlife theme and our ‘failte’ hedge at Derrycloney, a big clean-up and a display on the convent riverbank, amenity areas at Garoon and Debbicot, as well as the bug hotel in the park,” Kitty said.

The group is asking all locals to help by keeping the area outside their own premises clean and swept.

“If everybody did their bit it would take a lot of work off us. We appreciate any help, and we are delighted to say that Mountmellick scouts have come on board to volunteer,” she said, also thanking the CE scheme workers and SEE Ger O’Mahoney.

Secretary Maura Reddin had a special message for dog owners and illegal dumpers.

“Enough is enough. We are vexed at the amount of dog fouling, and people have to stop dumping on all our roads and bogs and riverbanks, we are not putting up with it any more, and we appeal to people that if they see anybody dumping, tell us or report it to Laois County Council,” she said.