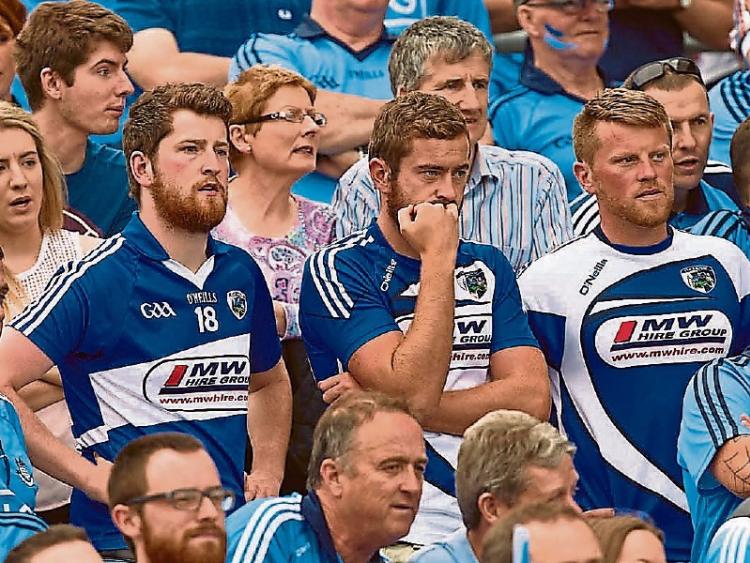 Laois fans were in the minority against Dublin last year in Kilkenny.

Portlaoise rolls out the blue carpet for All-Ireland Champions Dublin

Portlaoise will roll out the blue carpet for the Dublin's All-Ireland Champions as the make the Dubs begin as campaign which they hope will end in a three-in-row.

Laois GAA will also be delighted to get the big crowd-pulling matches to O'Moore Park over the next two weekends.

Thanks to the vagaries of GAA fixture making, Portlaoise host Dublin and Carlow in the Leinster Senior Football Championship on Saturday evening, June 3. The match is sure to attract a big crowd from both counties .

There will be some sense of justice in Laois circles that the Dubs have to play in Portlaoise this year after last year's debacle in Kilkenny where Dublin took on Laois.

The former Laois footballer and owner of O'Loughlin's Hotel in Portlaoise, Declan O'Loughlin, led criticism of last year's fixture. He is looking forward to the Dubs coming to town but feels for the Carlow players and team.

“We were due one last year. Having said that it was meant to be a Carlow home game and it is nice for counties to get their home games against Dublin,” he said.

Nevertheless he was looking forward to welcoming the Dubs to town.

“The Dubs are fantastic. They are great supporters. There was 17,000 in Kilkenny last year. It is a great occasion and I am delighted for Carlow. I have a pub there,” he said.

He said there was no logic to last year other than to benefit Kilkenny. He said it was supposed to be a home game for Laois and they deserved to play the Dubs in O'Moore Park.

He said it was “a shame” that the match was not played in Portlaoise, especially for the Laois players.

“It's marvellous for Carlow anyway and it'll be a great occasion. When the Dubs played Galway in an Under 21 All-Ireland Final, it was an enormous boost to the town.

“There was probably 25,000 fans down at the game. It was great for business and that is what towns outside Dublin long for is a good day like that. The GAA crowds are tremendous,” he said.

Mr O'Loughlin played against Dublin in the Leinster Championship for Laois in 1981 in Tullamore. Laois beat Dublin that year.