Leo Varadkar is inextricably linked to the future of Portlaoise hospital 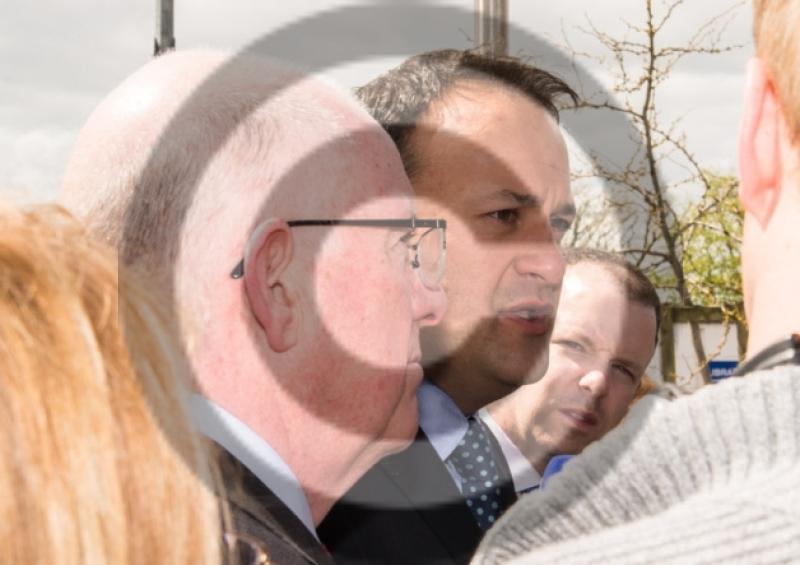 The crisis at hospital's maternity unit led to him visiting the hospital a number of times. He met parents, patients, staff and management but also took some time to talk to the Leinster Express about the hospital on one visit in 2015

No decision has been reached on the hospital's future status. Minister Charlie Flanagan predicted during the Fine Gael election race that it's position in the health service will come back onto his desk as Taoiseach.

Here is the text of that article

Minister James Reilly showed the way last year in his support and actions to help families to get answers from Portlaoise hospital. But Minister Leo Varadkar went a step further last week with his unprecedented visit to the hospital, meeting parents, staff and management during his 12- hour stay in Portlaoise.

In an interview afterwards with the Leinster Express, the Minister spoke about what he learned from his meeting with 160 people who have suffered as a result of their experience in the hospitals maternity unit. He said he would like to have met them all individually.

"Had I done that I think I would have been giving people appointments in three months or six months time and I dont think that would have been satisfactory. But I want to thank them very much for sharing their experience with me", he said.

The Minister revealed that there were three main themes to emerge.

"There were a lot of people who wanted to raise individual issues and are looking for answers and resolutions to their own individual cases which isn't something I can give them but I think that the Dr Peter Boylan process (an obstetrician review of cases) does and I am trying to accelerate that.

"There were issues specific to Portlaoise - ones that I knew about and ones that I didn't know about and they now have to be dealt with. Thirdly there are issues that are systemic to the health service.

"I'd say if you got people going back 20 years who had a bad experience of my local hospital in Blanchardstown or the Mater or Cork University Hospital they might have said similar things. A lot of it wasn't just down to the quality of care they received but the way they were treated afterwards both by the front line staff when they made complaints or were asked questions, and then subsequently by management and the system when things were passed up.

"That is the big thing that maybe I can try to change. What I said to people is that I am not able to fix people or solve individual problems but it is my responsibility to try and fix the system. That's why particularly having an in-dependent patient advocacy service will really change the culture in our health service so that it is more patient centred than at the moment", he said.

Asked if the meeting changed his view of the hospitals future, specifically maternity, the Minister said his six hour meeting with families gave him a different outlook.

"Just seeing the hospital, meeting management and staff I would have come away with one impression but meeting the families I came away with a different side of the story. Even with the patients and families there would not be a consensus. There are some people who said that they had such a bad experience that they wouldn't go there (to the hospital) again and it wouldn't make any difference if it was closed or not.

"There are others who have been back there since and have had very good experiences. So there wasn't consensus on that. What I did say, is that any decision made in any part of the country about reorganising services would be made in the best interests of patient safety and outcomes, not on financial savings", he said.

Minister Varadkar met staff after a meeting with local and regional management. He was also accompanied by Department of Health officials. The Minister has said he is ashamed of some of the care given and clearly wants accountability. However, he does not paint all staff with the one brush.

"They are very committed to their jobs and the hospital. A lot feel bruised and feel that they have been singled out and some feel they have been sin-gled out as individuals. A lot would say they were doing their best in very difficult cir-cumstances. While I believe it is the case that some people in the hospital failed in the delivery of professional duties, I don't think it would be fair to cast that aspersion on all or even most of the staff", he said.

Politics and health are inextricably linked. Political careers have fallen or risen on the back of local hospital services. He believes it is time political responsibility is needed.

"What we have to accept political responsibility for in this country is trying to spread our resources - staff, money and equipment - too thinly. Absolutely, politicians have to take responsibility for this. I remember very well the big furore over cancer services being centralised.

"I remember very well the fact that we had marches in towns to defend services that were sub-par. Some politicians went along with that and others stood up to it. I would have more respect for those who had the courage to say to people that what they were calling for was in their best interest", he said.

Hiqa's report focuses on Portlaoise's status as a Category 3 hospital and whether it should be resourced as a general hospital with emergency services and surgery. The Minister believes such categorisation is wrong.

"I think that whole concept is nonsensical and I am trying to get rid of it. The idea that you can categorise hospitals is nonsense. Every hospital is different. Take somewhere like Bantry which is very far away from Cork and Tralee and compare that to Navan which is 20 something minutes from Blanchardstown hospital and yet they are both categorised as category 2.

"To me it is not a helpful construct and leads to the idea of upgrading and downgrading. To me every hospital has a unique role in its hospital group. That is the way we should be doing it, not this crude banding system that I don't agree with at all", he said.

So does he have a view on Portlaoise's future and when will decisions be reached on what services will be kept and when decisions will be made?

"Hiqa have recommended that there be an action plan. Even talking to the staff they want a clear plan and strategic direction and something that they can get behind. We need to put a plan in place sooner rather than later. I don't want to put an exact timeframe on that, but it also needs to take into account the impact on other hospitals", he said.

Regardless of the Minister's view, moving services out of Portlaoise will be politically sensitive. So will decisions be taken before a general election?

"The decisions going to be made on reorganising services have to be based on the best clinical advise. I see my role as Minister is to back up the medical advice, not to sit around the place making these judgments myself", he said.

Hiqa made a lot about re-sources for Portlaoise to deliver care. The report points out that a 2006 plan for a new unit was never acted on. They say a plan to improve facilities temporarily is not mak-ing progress. The maternity unit is definitely going to require capital investment, no question about that, but the number of capital investments around that are required dramatically exceeds the budget. The Minister felt investment was not vital. Not necessarily in terms of safety.

The Minister agreed that Portlaoise hospital had been neglected.

"I think it is the case that this place was allowed to drift without a clear strategic direction for quite a number of years probably going back decades and I think the major flaw going back decades in this region was the fact that one single regional hospital with half a million people wasnt developed.

"What we need to do is reorganise our services in a better way and that is what the hospital groups are all about", he said.

As to whether pregnant women and the people of Laois can have confidence in their hospital, Minister Varadkar was hopeful.

"I hope they do. I can't speak for the community here, I am not a member of the community here, but I certainly hope they have confidence in the hospital. Because of the changes that have been made over the past year or so this hospital is probably safer than at any time in the past ten years," he concluded.