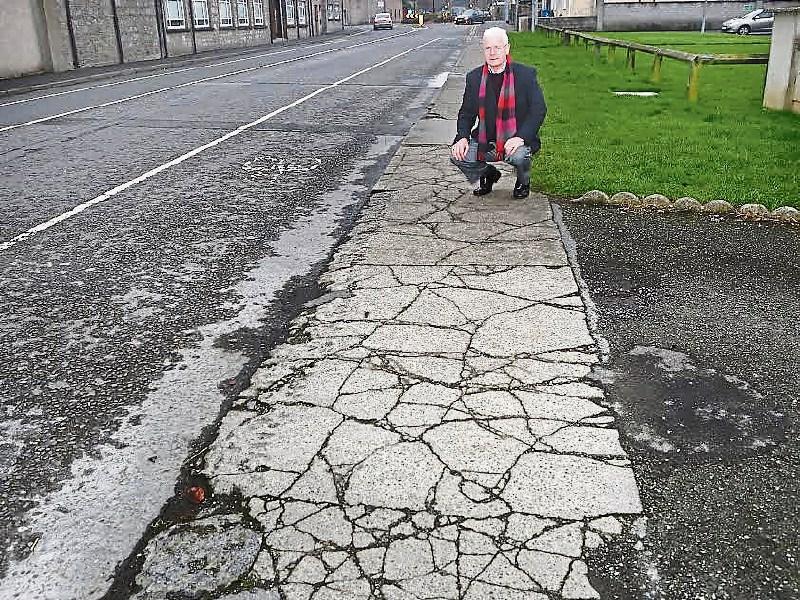 An surprise windfall of €2.65 million to Laois County Council is earmarked for work on footpaths, but county councillors are fighting it out to get the lion’s share of it.

The cash is a refund from Irish Public Bodies, the council's insurers. Some €880,000 will be refunded to the council annually over the next three years.

Cllr James Kelly said his Municipal District of Borris-in-Ossory / Mountmellick should get the majority.

“It should get the bulk because it is the biggest area,” said the Mountrath-based Independent politician.

“We’ll be looking for our share in the Portlaoise area. Any motions we submit, we are told to use our own discretionary budgets. It is my intention to put €10k into Hillview Drive, but I welcome the extra budget to finish the whole area. I’ll be twisting Kieran Kehoe’s (Director of Services), arm up his back,” she said.

“We are out of the starting blocks already, there is 2.7km of paths in the town that need an upgrade, I estimate that will cost north of €300k,” he said.

Cllr Ben Brennan, an Indpendent, wants some for Crettyard’s paths.

“They are in a very bad state. A young lad using a wheelchair there was knocked out of control, and he was robbed. The only way he can travel is on footpaths and they need money,” he said.

Cllr Paddy Bracken,a Fianna Fáil councillor based in Mountmellick said the money should be targetted.

“Can we look at areas where people have mobility issues, and focus on access? We should do this if we have the opportunity of spending this money. Every town will have this problem,” he said.

“We have three municipal districts, this money is about dangerous footpaths, we should leave it up to the engineers to assess where the real problems are, over the next three years,” he said.

Cllr Mary Sweeney and Cllr John Joe Fennelly complimented Cllr Jerry Lodge for bringing back the news from the IBP, where he represents the council.

Cllr Lodge had the last word.

“I smiled when Cllr Kelly gave out his list, it reminded me of the late Martin Luther King, 'I have a dream'. One of the terms and conditions is that I would oversee the budget, so you can all come and talk to me,” he said