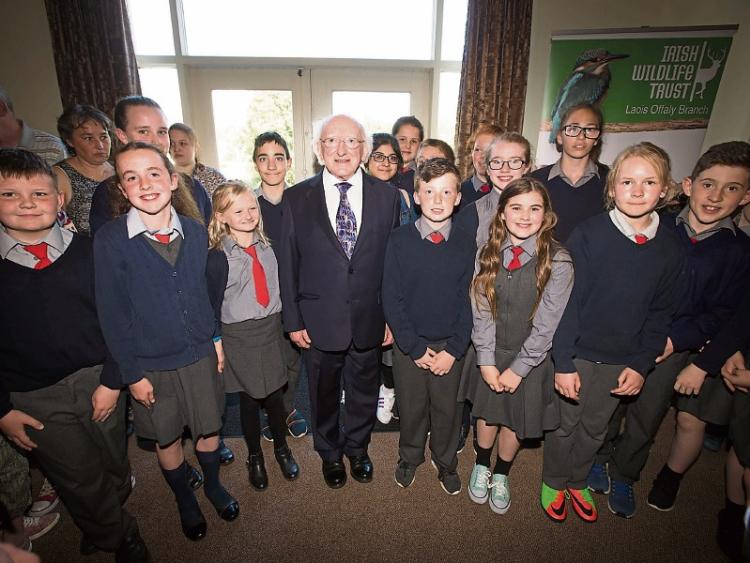 Abbeyleix basked in warm praise from President Michael D Higgins, as well as warm sunshine, when he visited its restored bogland recently.

The president strolled on the new boardwalk, guided by ecologist and local volunteer with Abbeyleix Bog Project, Fiona McGowan.

“He showed particular interest in the carnivorous round leaved sundew, and bogcotton. His aides had orders by Mrs Higgins to pick some bog cotton to bring back to the Aras,” she said.

President Higgins heard how the volunteers installed 17,000 dams in the bog drains since 2009, restoring moisture and new growth to the rare intact raised bog.

He also stopped at the bug hotel to chat with zoologist Ricky Whelan, chair of Laois Offaly Irish Wildlife Trust.

Earlier, President Higgins had harsh words for those who burn land illegally, in a passionate speech on the environment, at the launch of the Community Wetland Forum's plan in the Abbeyleix Manor Hotel on May 25.

“I don't think we can continue to tolerate people who continue to cause environmental damage. Year after year these fires are a regular part of the agricultural calendar, without enough consequences. There is nothing romantic about breaking the law. The biggest sanction is if you know people responsible, to say 'you should be ashamed of yourselves',” he said.

He praised the Abbeyleix Bog volunteers and the Community Wetland Forum.

“I congratulate all who have taken the lead, who gave precious time and resources, in a shared intergenerational vision of living an ethical life in harmony with our surroundings,” he said.

He praised the big number of children at the launch.

“Because of this project, you will get to experience the beauty of wetlands in the future,” the President said.

He hugged young Aidan Lynam from Knock NS who read a poem about Abbeyleix bog, and accepted a photo of sundew on Abbeyleix bog, from photographer Tina Claffey's son Tristan.

The launch was expertly MC'd by Heywood CS students Caoimhe O'Keeffe and Ruth Bergin, whose study of Abbeyleix Bog was shown at the BT Young Scientists fair.

The presidential endorsement is a welcome boost.

“It's a fantastic recognition for the whole community's effort over the last 17 years. We hope the next generation will get involved,” said volunteer Des Finnamore.

Ecologist Mark McCorry is with Bord na Mona, who gave the bog to the community.

“We are delighted to give it continued support. Today shows the terrific success they have made of it,” he said.