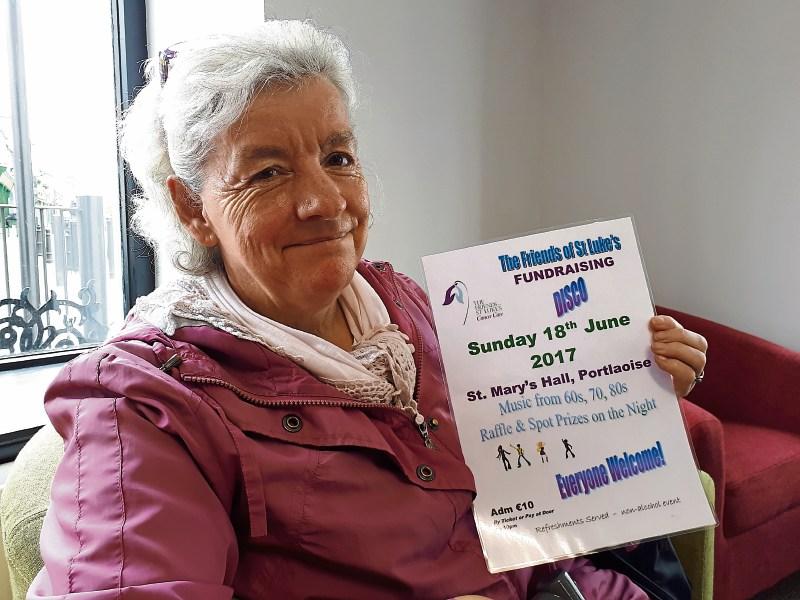 A concert that promises the best live tunes from the 60's, 70's, and 80's, takes place in St Mary's Hall in Portlaoise this weekend, all to aid cancer hospital St Luke's in Dublin.

Portlaoise lady Esther Doheny has battled cancer and survived, and now wants to help others facing the same challenge.

She is hosting the funfilled 'Bringing back the good times' disco for all ages this Sunday June 18, Father’s Day, to raise money for The Friends of St Luke’s.

“This is for other people who are going through it all. I came out at the end, and I want to help those who need help. We are all only here for a short while, we should be there for one another,” she told the Leinster Express.

Esther stayed in the Oakland Lodge at St Luke’s Hospital while she was undergoing chemotherapy and radiation therapy.

“St Luke’s is a brilliant hospital, the staff are tremendous, they do all they can for you and they are so kind,” she said.

Esther is originally from John’s Square and now lives in Kilminchy Court.

She had the added trauma of losing both her mother and her partner Fergus in the same year that she was having her lifesaving treatment.

“I believe they are with me all the time,” she said.

She has organised a night that offers a time to dance to all the old favourites, with live music by locals Frank McNally and Malcolm Smyth and his band.

“It is for all ages, with spot prizes and refreshments. As the ticket says, we are bringing back the good times. People are coming from all over for it, and staff from St Luke’s, St James’ and Beaumont as well,” she said.

“If it takes off, I will have another one for another cause, lots of people need help out there,” Esther said.

Admission to the disco is €10, and a big raffle offers two tickets to the All Ireland hurling or football final, as a top prize.