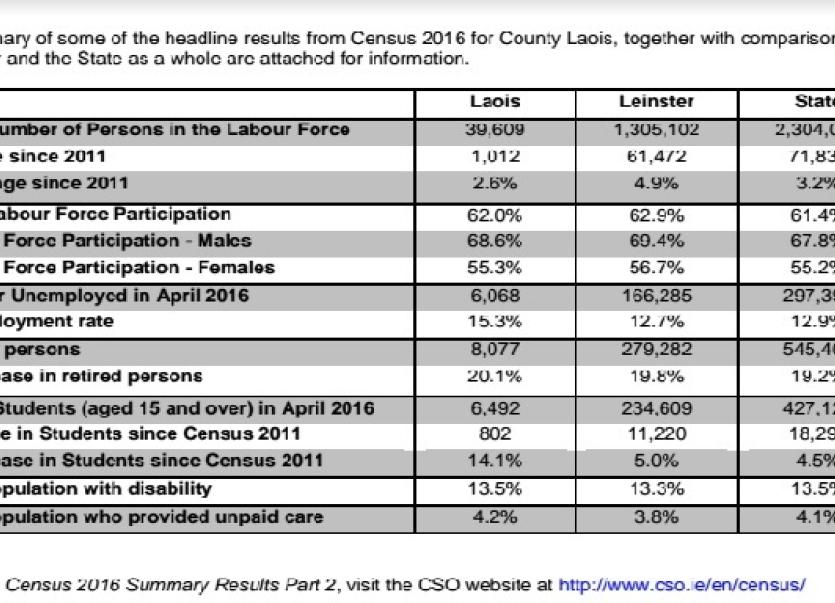 The unemployment rate in Laois is higher than the national average and there has been a sharp rise in the number of students in the county.

The findings are contained in the latest set of findings from Census 2016 which also reveals that the county has a higher than average rate of labour force participation.

As regards unemployment, there were 6,068 unemployed persons in Laois when the Census was taken in April 2016. The overall unemployment rate for the county  on this basis was 15.3%. This compared to an unemployment rate of 12.9% (297,396 persons) for the State overall.

In Census 2016, some 13.5% of Laois’s population indicated that they had a disability, and this was identical to
the national figure.

Just over 4% of Laois residents provided regular unpaid personal help for a friend or family member. At the national
level, 4.1% of the population stated that they provided such care.

Some 86.8% of Laois residents stated that their health was either good / very good, compared to the national figure of
87.0%.

The Census revealed that the number of people of Laois stood at 84,697 in April 2016. This was an increase of 5.1% since 2011. The Census taken in 2011 showed that Laois had the fastest growing population in Ireland. It lost this top spot last year.

The findings for Laois and other counties were published by Central Statistics Office (CSO). The headline
results show that there were 2,304,037 people in the Irish labour force in April 2016, an increase of 3.2% on the 2011
figure, giving an annual average rate of increase of 0.6%.

This compares with 1.1% between 2006 and 2011. Deirdre Cullen, Senior Statistician, commented:

“With today’s publication of the Summary Results Part 2, the CSO has now released first results for all of the topics in the census. This report focuses on the socio-economic aspects of the census such as employment, occupation and education, as well as health, disability and caring.

All of these reports will be available at www.cso.ie