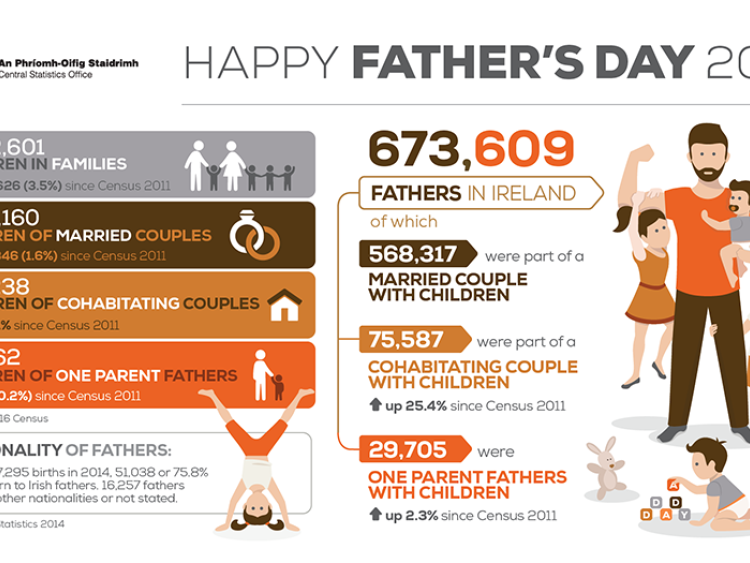 Fathers Day in Ireland Facts from the Central Statistics Office

That’s how many socks?

Where do babies come from?

James and Emily were the most popular babies' names in 2016.

Of the fathers of the future, the top five boys' names, James, Jack, Daniel, Conor and Sean have been in the top five since 2007 with minor changes to their order.

For boys, the names Muhammad, Louis, Lucas, Josh, Jason and Ollie have had the most growth in popularity. Muhammad jumped 36 places in the rankings since 2015, up from 119 to 83 in 2016 to make it the only new entrant into the top 100 names for boys.

Back in 1966, John, Michael, Patrick, James and Paul were the names most favoured by parents of new born baby boys.

Willow, Matilda, Harper, Heidi and Zoey have shown the most growth in popularity in girls’ names between 2015 and 2016 and these together with Aria were the only new entrants into the top 100 names for girls in 2016.

As tools and equipment for house and garden are often considered as presents for Father’s Day, the good news is that according to the Consumer Price Index the prices have dropped 3.7% since 2016. Eating out in restaurants has increased in price by 1.8% but if you don't have a babysitter then you could have a pizza/quiche at home, which is 11.1% cheaper than last year. For popular drinks options, a bottle of wine from the off-license is 5.2% cheaper than 2016, or a mineral water which is 1.5% less expensive, or a soft drink which costs 3.6% less than last year.

Why not check out the CSO's new interactive tool for Ireland's Top Motors here.