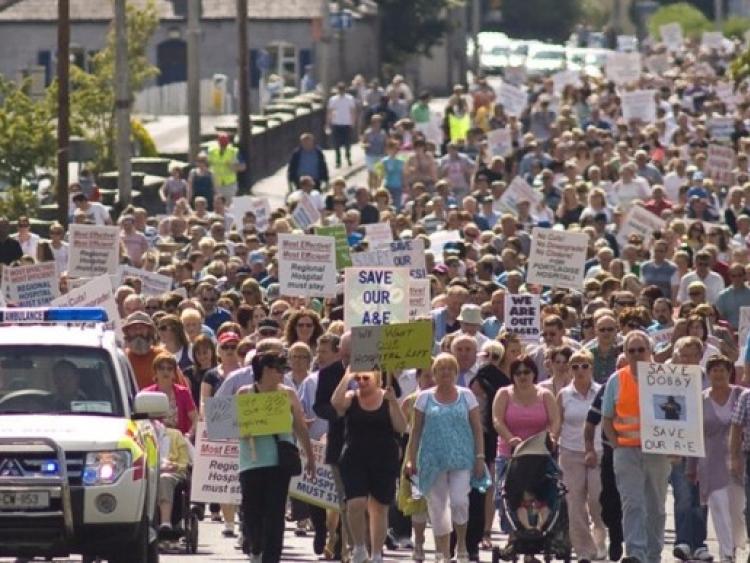 Protest March against the downgrading of Portlaoise General Hospital in 2011. Photo Denis Byrne.

Laois Sinn Féin TD Brian Stanley has called on Charlie Flanagan to finally secure the future of Portlaoise hospital on his reappointment to Cabinet by Leo Varadkar.

Deputy Stanley extended his best wishes to his Laois constituency colleague in his new role as Minister for Justice and Equalty, but he tempered this with a call for action.

"I wish Charlie well on his appointment as Minister for Justice where he will have his work cut out for him.

"The reform of the gardaí needs to be a priority for him in his new portfolio and it needs to be accelerated. He should increase front line policing with improved garda visibility along with enhanced powers for Joint Policing Committees," said the Sinn Féin TD.

However, Dep Stanley said the local priority must be healthcare. Minister Flanagan has opposed downgrade but Dep Stanley believes Mr Flanagan now has a responsibility to end doubts.

"Now that he is back in Cabinet there is an onus on him to secure the future of the Emergency Department in Portlaoise Hospital. We've had enough of the procrastination, enough reports, reviews and can kicking and Charlie now needs to deliver on it," said the Laois TD.

Deputy Stanley has said the new Taoiseach Leo Varadkar "showed little interest in Portlaoise Hospital" when he was Minister for Health.

"In particular he showed an unwillingness to take on board the necessity of retaining and upgrading the 24 hour Emergency Department," he said.

Dep Stanley said that he wants to know what view Leo Varadkar will take on the future of the hospital.

“When all the hype over Leo’s elevation dies down, the key question will be –what does his appointment mean for public services and in particular Portlaoise Hospital?  The health care of the people of Laois and surrounding counties is paramount,” he said..