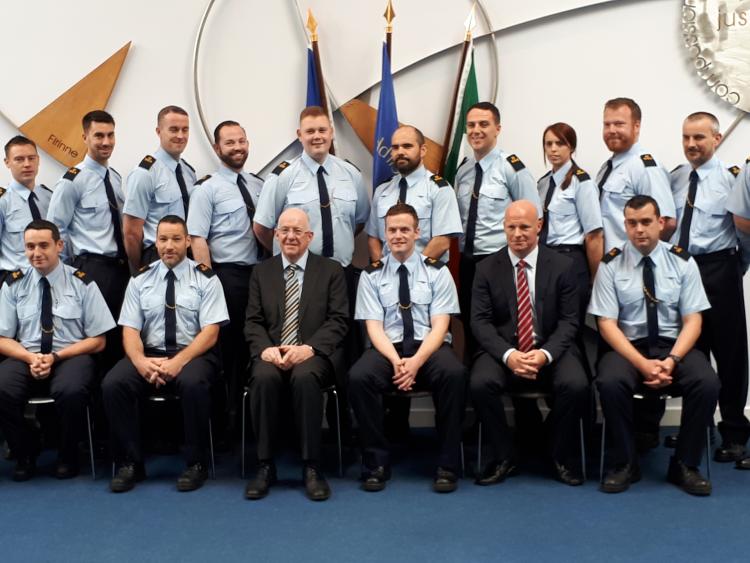 Minister for Justice Flanagan and some of the new recruits.

Laois TD and new Minster for Justice and Equality Charlie Flanagan has welcomed the recruitment of prison officers after 'deep recession'.

In his first public engagement as Minister Flanagan visited the Irish Prison Service (IPS) Training College in Portlaoise and addressed 17 Recruit Prison Officers in advance of their formal Passing Out ceremony this afternoon.

“I am delighted to carry out my first official engagement as Minister for Justice and Equality here at the Irish Prison Service Training College in Portlaoise to mark a very special day in the lives of the new recruits and a proud day for their families and loved ones.

“This is also an important day for the Irish Prison Service, now recruiting again after some difficult years during our deep recession,” said Minister Flanagan.

The Minister also viewed the refurbishment work underway at the college and presented medals to a number of prison officers in recognition of their years of dedicated service.

Addressing the new prison officers, Minister Flanagan congratulated them saying that it was “a hugely important day for you, for your families and for the Irish Prison Service”.

The Minister noted the challenging and rewarding role of prison staff saying that the Service was not defined by walls, locks and bars but by the men and women who make up its ranks.

"While it is your role to enhance public safety by holding prisoners securely and by providing care and rehabilitation, treating people with dignity and respect should always be a core aim. You will play a special role on behalf of society and will have the opportunity to change the lives of many people who will look to you for help, support and an opportunity to change,” he said.

The Minister said that the unique role of a Prison Officer required a number of key competencies.

“The ability to direct others, to support others, conscientiousness, adaptability, and communications are all key competencies. However you will also need resilience. Prison Officers have to work in a potentially stressful environment, encountering conflict and distress and you will need to be able to manage you own stress and emotions” he said.

The Minister added that the Irish Prison Service would provide the staff with the support and skills to help them meet the challenges and maintain good physical and mental health.

Minister Flanagan also met with the Director General of the Prison Service, Michael Donnellan and the Governor of the College, David Clarke.