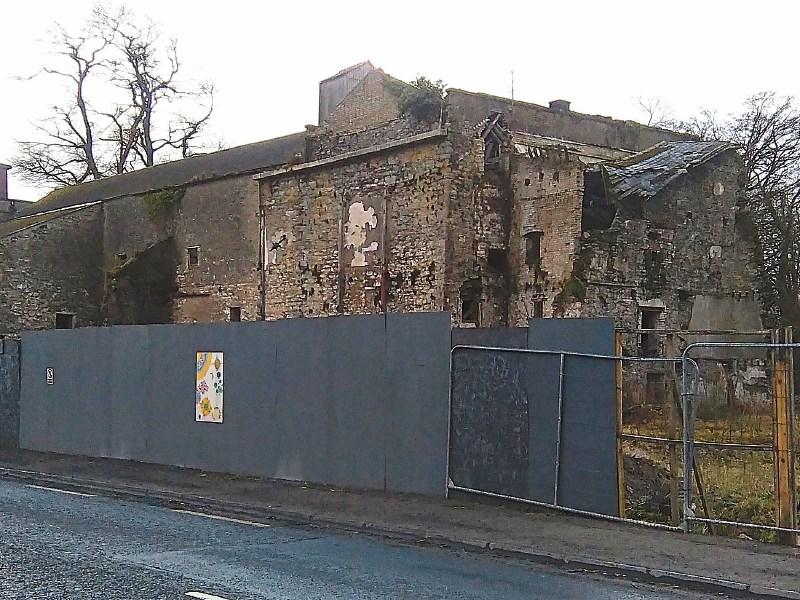 A prominent and partially derelict historic factory in Mountmellick is to receive a €80k facelift, but its future remains unclear.

The century old Maltings factory on the Portlaoise road closed around 2000, and parts of the four storey building have begun to fall.

Laois County Council is understood to have bought the building in recent years after the National Asset Management Agency offered it to the authority for a low price.

The council erected site hoarding which has repeated been blown down over the past few years, replaced in part with metal fencing.

While the future use of the Maltings is still understood to be undecided by Laois County Council, it has in the meantime secured funding of €80,000 to erect a permanent boundary, of a stone wall topped with metal railings.

Mountmellick Tidy Towns committee has welcomed the work, and has outlined the plan to improve the site in their application for this summer’s competition.

“It would be absolutely wonderful. It is such an eyesore as it is, with the fact that it is at the entrance to the town. The sooner the better,” said PRO Barbara Lalor.

The site is unsafe she said.

“There were young kids going in there because the hoarding was blowing down. It needs to be made safe. In the long term we would love to see it cleared and houses built there,” she said.

The historic factory was opened a century ago by the Codd family, producing malt for the drinks industry and fortified malt as a health supplement, up until about 2001.

During the building boom, the Maltings was earmarked to become a luxurious apartment block. The developer received planning approval for 37 one and two bedroom apartments. The site was partially demolished at the time.

Hume Auctioneers had sold 20 of the apartments off the plans, promising them to be “noiseless, spacious and bright with cutting edge technology” with the historic site preserved and an “ancient garden” restored.

The site later went into the books of the National Asset Management Agency.