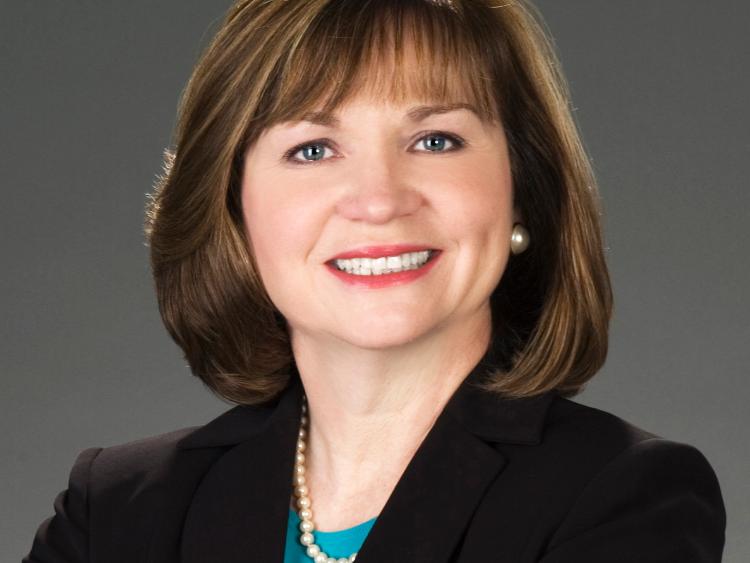 Maureen Dunphy Brady who has roots in Ballinakill, Co Laois.

A woman with strong Laois roots is the first place winner of a prestigious scholarship supported by the St Patrick's Day organisers in New York.

Maureen entered the contest in her capacity as a graduate student at New York University’s prestigious Glucksman Ireland House, pursuing a Master of Arts in Irish and Irish-American Studies.

While growing up, Maureen recalled their dedicated efforts to nurture and cultivate the city’s County Laois Association Social and Benevolent Association, and to guarantee a contingency of marchers every St Patrick’s Day to proudly transport the county banner up Fifth Avenue.

Her father, Mick Dunphy, long-time President of the Laois GAA Hurling and Football Association in New York, helped sponsor trips for scores of young athletes from Ireland to play on the county teams. Her Laois roots were never far away, as Brady accompanied her parents on numerous trips to Ireland to visit relatives still residing there.

A “city kid,” born and raised in New York, she found it exhilarating to spend time on the family farm and to learn about a rural life so different from her urban upbringing. She especially enjoyed hearing her aunts’ and uncles’ stories of youthful adventures and sibling shenanigans. Those childhood trips instilled in her a deep-rooted connection to the family’s home-place and a profound respect for her heritage.

She valued the unique opportunity to live in Dublin for three years and travel throughout the country meeting with Travel Agents and Corporations to further the interests of Delta, while also learning as much as possible about the history and literature of the country.

In addition to her role at Delta, she was elected as the first female President of the U.S. Chamber of Commerce in Ireland, representing the interest of over three hundred and fifty American companies doing business in Ireland, and was appointed by US Ambassador Jean Kennedy Smith to the Board of Directors of the US Fulbright Commission.

Maureen acknowledged that she is an atypical graduate student in that she returned to academia after retiring from the corporate world. Her motivation to do so was inspired by her desire to deepen her knowledge of the spectrum of Ireland’s history, particularly the underpinnings and roots of transatlantic tourism.

She has worked closely with her academic advisor, Prof. Marion Casey at Glucksman Ireland House, to investigate themes and intersections in transatlantic tourism that have been previously unexplored. Last summer, as part of her NYU program, she studied at Trinity College Dublin where she studied Irish language and history, and conducted research for her thesis at the National Library of Ireland, National Archives, as well as the James Hardiman Library, NUI Galway.

“It was a special experience that I will always cherish,” she said.

The Laois descendant's ground-breaking thesis examines the roots of transatlantic tourism during the seminal period of the 1950s when the Irish Government, succumbing to pressure from US Marshall Plan officials, first introduced a transatlantic tourism strategy developed with advice from American experts, including Pan American Airways.

The 1950s decade was pivotal in Ireland’s tourism history, transforming the country from an easily by-passed destination into a familiar and attractive one for American tourists, as well as creating a foundation for transatlantic tourism for subsequent decades.

Her thesis dedication best sums up her perspective:

For my beloved parents, Michael and Kathleen Dunphy, whose transatlantic voyage was the inspiration for my thesis. Their emigration from Ireland to New York resonates within these pages. As a little girl, my trips to Ireland with them to visit family instilled in me a lifelong love of all things Irish. I am thankful for their enduring legacy: pride in my heritage, respect for those who came before me and a spiritual connection to a place which makes my soul sing.

Maureen and her husband Paul are residents of New Jersey and are frequent visitors to Ireland.

“We travel extensively. But, for us, Ireland is the place where we both feel that we are at home. We try to visit as often as possible,” she said.

Some of their favorite places to visit in Laois are Heywood Gardens, Emo Court, the Slieve Bloom Mountains, the Rock of Dunamase, and, of course, Morrissey’s in Abbeyleix.

Maureen's brother Mike is an active member of the New York Laois Association.

“We thank the panel of judges who gave up their time to review the research papers and especially thank all of the applicants for their submissions,” said Catherine Tully Muscente, Co-Chair of the program.  “The scholarship program is important as it engages young individuals who are interested in Irish heritage; they will be the future leaders of the parade and in society.”

The Saint Patrick’s Scholars program is sponsored by the St. Patrick’s Day Foundation which established an initial $30,000 fund to continue this important program.

“We are delighted with the results of the contest.  The winners are representative of all of the marching groups that participate in the parade”, said Hilary Beirne Co-Chair of the program and Chairman/Co-founder of the Foundation.  “We look forward to sponsoring the program again next year and are grateful for support of the affiliated organizations, the schools and colleges who encourage students to submit research papers”.

The New York City St. Patrick’s Day Parade, which began in 1762, marches up Fifth Avenue every year on March 17th in honor of St. Patrick, the Patron Saint of Ireland and of the Archdiocese of New York.

A delegation from Laois County Council travels to the 'Big Apple' every year for the festivities.