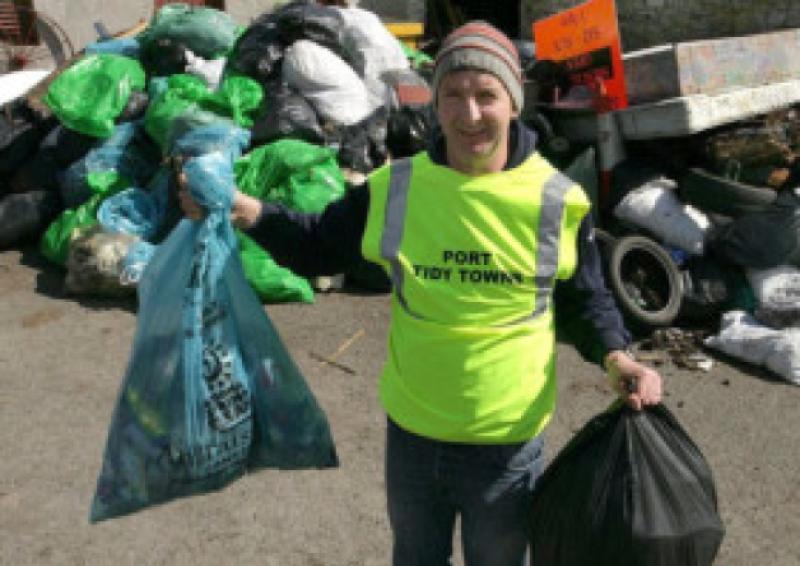 David Maher is pictured with the piles of refuse which he collected in Port during previous clean ups.

Portarlington Tidy Towns has pulled out of the National Tidy Towns Competition because of a lack of support from Laois and Offaly county councils.

The Committee said that it was a reluctant decision but that there has been no evidence to show the support pledged in the 2012 Portarlington Joint Local Area Plan 2012-2018 for the town.

The strategy states: “In order to promote the growth of Portarlington and assist in fulfilling its designation as a Key Service Town, the strategy will facilitate the development of an attractive and vibrant town centre that provides for current needs and future demands.”

The Tidy Towns committee has said that the situation is not feasible, nor is it a function of volunteers.

“The evidential lack of investment in the physical landscape of the town over the decades, despite the population surge, has also frustrated the work of the Tidy Towns Committee,” said a statement.

“The committee has attended numerous meetings and has consistently lobbied the council over the years, with no progress made on any agreed actions.

“This has resulted in time and energy spent on the same issues year on year instead of progressing the extensive work required to progress in the national competition resulting in an evidential lack of progress in the town,” said a statement.

“We cannot get new members because they think all we do is weed the roundabouts, pick up litter and clean the streets, we do so much more than that,” he said.

“We do not have anybody actively doing maintenance. The council would get people from time to time to do the weeding and maintenance work on the street but it is sporadic and random,” he explained.

Mr Hoey explained that there is no joined-up thinking between Laois and Offaly county councils for the town.

“A road sweeper goes up the town as far as Barrow Bridge one day of the week from Laois County Council and goes another day the other side of town from Offaly Council. It is a waste of funding,” Mr Hoey said.

The absence of progress on these issues led to it’s regrettable decision not to submit an application.