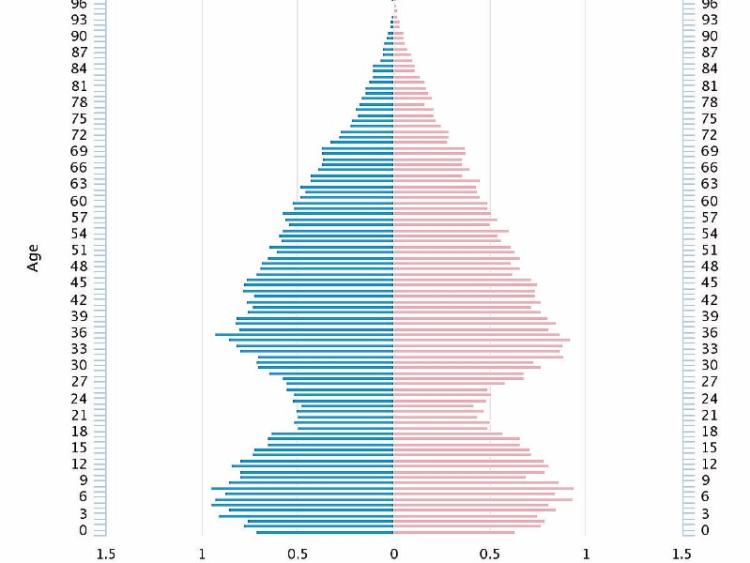 A large number of children and teenagers is contributing to a below average age in Laois, particularly in Portlaoise which now ranks as one of the 'youngest' towns in Ireland.

Those living in urban areas were on average 4.3 years younger than those in rural areas.

The results show that Portlaoise is the fifth 'youngest town in Ireland' with average age of 33.2 years.

This is driven by a big rise in the number of secondary school students. Since the 2011 Census, there has been a 17.5% rise, which is double the national average.

This trend looks set to continue as there are 11,591 children in the primary school age group.

However, the Census also reveals a big fall off in the number of people aged in their 20s living in the county. This trend reverses as people move into their thirties.

The Central Statistics Office points out in the results that the impact of third level colleges on the 18-22 age group is evident, showing their influx into cities and towns for education.

The county recorded significantly higher percentage declines than those seen nationally in both the preschool and young adult age groups.

However, Laois also showed higher percentage increases than those at national level in all age groups, other than the older age group.

For example, the percentage increase in the secondary age group was more than double that nationally – 17.6% compared to 7.7%.

Age Dependency Age dependency is a measure of the extent to which the young (aged 0-14) and older (age 65 and over) populations are dependent on the population of working age people, defined as those aged 15 to 64 years.

The dependency rate in Laois was 56.0%, i.e. the number of young and older people together were equal to 56.0% of the total number of working age people.