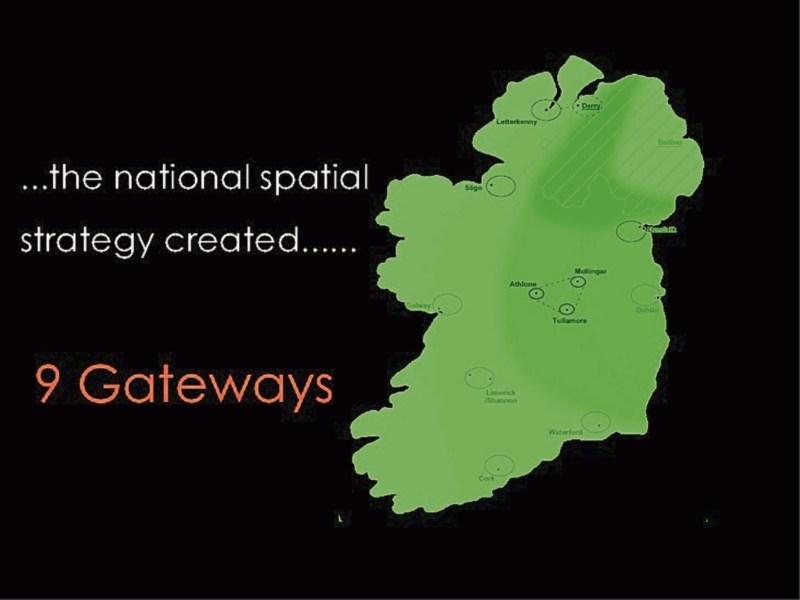 Does Ireland need another city?It's might seem an incongrous question, but nevertheless it was one that was discussed at the Cabinet think in meeting in Kildare last week.

The proposal was offered as a means of alleviating the so called choke on Dublin, or acting as counterweight to the growth of the capital.

The answer is no. And in any case, the possiblity is fairly remote.

The concept is even difficult to grasp, and there are few contemparaneous examples to look to for reference.

Last week's cabinet discussion took place amidst the framing of the sequel to the National Spatial Strategy, euphemistically titled 'Ireland 2040.'

And with this new plan, which is due to be produced by the end of this year, we may well again find ourselves back in the world of gateways and hubs.

The NSS itself could hardly be rated much of a success, due to a number of reasons, not least the needs of local politics.

The formation of the Athlone, Tullamore and Mullingar (ATM) axis,or hub, turned out to be a non-event, as one might have predicted it would be at the time.

The NSS perpetutated an injustice against Portlaoise by its outright ommission from this plan, though in retrospect this might have been no bad thing.

However, it should not have happened and it made a mockery of any notion of achieving regional balance.

And as is manifestly obvious from talk of a new city, no real regional balance has been created throughout the country.

The treatment of Laois and Portlaoise is a case in point.

Its central and strategic location has been ignored for decades now, when it comes to the location of industry and multinationals.

Limerick and Cork can rightly feel hard done by, but so equally can this area.

Population wise we are one of the fastest growing in the country, effectively a commuter satellite for Dublin.

This so called doughnut effect around Dublin could be tempered if there was more adherence paid to the development of this and other areas.

We have the people, space and location.

New cities are the stuff of fantasy. Developing what's there requires no leap of the imagination.