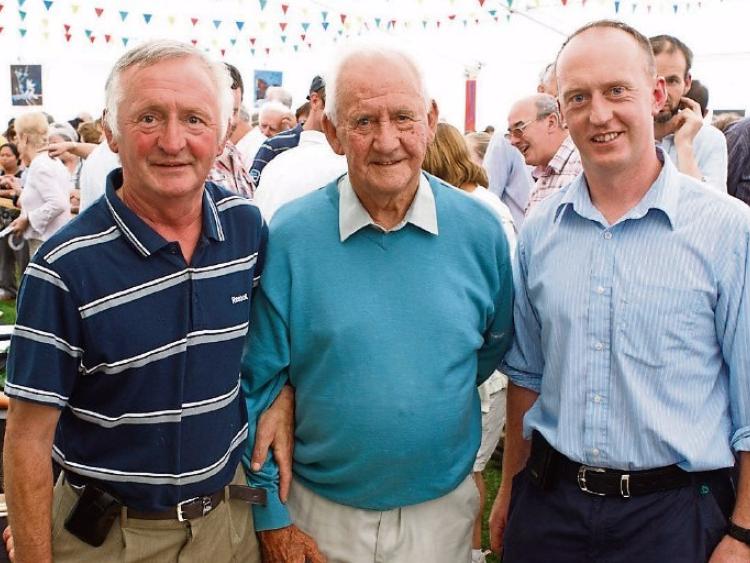 It is rare for anyone in their 90's to win an All Ireland title, but Harold Lawlor, 94, from Durrow has done just that, at the Tullamore Show.

Harold, known as 'The Boss' by his family and friends, is a champion vegetable grower, and his meticulous methods have won him the title about six times in the last 25 years.

It was his 'collection of vegetables' that won him the title this time, with a perfect display of celery, carrots, parsnips, potatoes and cauliflower. In all three generations of the Lawlor family won trophies at the show.

“It is lovely to win anything at my age,” Harold told the Leinster Express.

A native of Dublin from three generation of vegetable growers for the markets, he moved to Bagnalstown when his married his Dublin florist wife Sheila.

After ten years as head gardener at Dunleckney Manor, he was offered a similar job with Captain Hamilton's estate in Moyne.

His interest in vegetable competitions began in those time, when the big houses would compete against each other for the honour of having the best crops.

In 1966 the couple opened their own nursery in Durrow village to supply flowers and vegetables to the Dublin markets.

“Sheila made the business, she had a great way with people, they would come to talk to her never mind buy,” he said.

“The boys all helped growing up. I started with a small greenhouse and kept extending as money came in. We grew roses, dahlias, and grafted our own plants. We would leave at 4.15am with our produce to sell through a market auctioneer to the big shops, and be back home by 10.30am,” he said.

He handed over the business to his sons, twins Martin and Oliver, 20 years ago.

“I kept two tunnels and a bit of a plot back for exhibitions and I've been at it ever since,” he said.

Vegetables for shows must be a top standard.

“The standard at Tullamore Show is the best in Ireland. There is no secret. Except to use good seed, prepare your ground well, I use farmyard manure, and timing,” he said.

“Cauliflower for example takes 110 days from sowing seed to maturity, some varieties are less, so you have to sow to aim at show dates and hope the weather is good. You cover your bets by sowing at three different intervals,” he said.

He loves eating his vegetables too, and counts that among the reasons for his long healthy life.

“Of course I love vegetables, you couldn't believe the quality of eating fresh vegetables compared to what you get in a shop. I don't drink, and I never smoked, I was into all sports, and the outdoor life. I work every day, the year round, I go to my little plot,” he said.

Everybody can grow vegetables he said.

“Even if you have a small garden you should be able to keep your family going if you time the stuff right. Anyone can grow peas, lettuce, cabbage and cauliflower,” Harold said.

His next show is in his sights already, at Tullow.

Harold's expertise often sees him judging shows and giving talks at the nursery, popular with Mens Shed and GIY groups.

He has passed his passion on to his children and grandchildren, with his grandson Colin, an army officer, scooping the second prize at the Tullamore Show.

His son Martin is proud of his dad, comparing his skill to that of a baker.

“If I thought I would live as long and be as fit, I would be a happy man. He is a perfectionist. When he wants something done, he wants it done yesterday. That's why at 94 he is still winning. His mixes, his timing, they are like the ingredients of a cake,” he said.

The business has changed since Harold's days.

“Oliver is the florist and I am the grower. We buy in more flowers to sell, than we grow now because it is cheaper to import them. Most of our sales are flowers, with the wedding market growing, but we still sell vegetable plants, and that is down to the reputation we have of winning at shows,” Martin said.

The twins are 65 now but won't be retiring for the foreseeable future.

“We will keep going as long as we have our health,” said Martin.