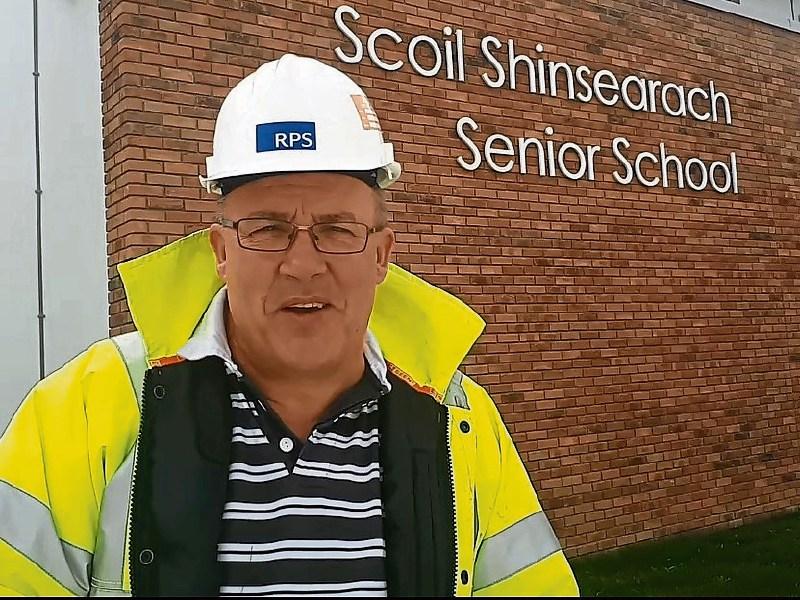 The final coats of paint are going on and the chairs and tables are being carefully placed, for the momentous opening this Thursday of the Holy Family primary school campus in Portlaoise.

The Holy Family Junior and Senior Schools in Aughnaharna will each have 700 boys and girls, along with 50 and 52 staff respectively.

The Junior School is complete and builders are working around the clock to get the senior school ready.

The state-of-the-art 24 classroom school buildings each have large GP halls, as well as a shared sports hall that is not quite complete.

There are also playgrounds for each school, and a shared astroturf pitch.

The senior school has an ASD unit for 12 pupils, with a similar one to follow in the junior school.

Principal of the Senior School Des Sutton says the school will definitely open for Thursday morning.

"The thirds and fourths at 9o'clock, and the fifths and sixths at half nine. Over the next few days we'll get it all organised, we're ready to go. For the staff and the children, it is a major step forward," he said.

Deputy principal Meree O'Sullivan showed the Leinster Express around the school, where teachers and past pupils are all volunteering their time this week to move in furniture and add the finishing touches.

The brightly coloured new classrooms, corridors and halls are spacious and warm.

"I've spent all my working life at St Paul's, this is like moving home, for the children and the teachers, it is a new start for us all. Everything we love is here, it's just a matter of settling down now," she said.

Among the new state-of-the-art equipment, are the school's five Virgin Mary statues, and their roll books going back 200 years, while every photo on the walls of the old school has been stored digitally.

“It is lovely and bright, the kids are going to get such a land, they will be so shocked, St Paul's was so little,” she said.

"We are so grateful to Fr John, he had the vision and he was so determined to see it through, without him we would have no school," Ms O'Sullivan said.

The two Holy Family Schools are an amalgamation of St Pauls NS, Scoil Mhuire and the Sacred Heart NS.

For the past year, the two new schools were split between several old school buildings in Portlaoise town centre, as building work was delayed by over a year.

The Junior School is fully ready for its six classes of new little Junior Infants pupils, including three sets of twins this year. It caters for children up to 2nd class .

Principal Enda Hickey said it was “a dream come true” for everybody.

“We have a dedicated library/computer room, a staff room where we can all actually meet at the same time, the children can play in the one playground.

“It's something we haven't experienced since the school was founded, we were never under one roof. Prefabs always created a physical distance but now we can close the door behind us and be in the one setting,” he said.

High spec technology will include touch screen whiteboards in every room.

“It is a huge leap forward, It is only right that the children should experience the best of what's on offer,” said Mr Hickey.

An open day for parents and the wider community to come and visit the new campus will be held once the site is fully finished.

“It is important, especially as the parish itself invested €1.2 million towards this,” Mr Hickey said.

Parish Priest Monsignor John Byrne said it is an end of 40 years of Portlaoise parish children in prefab classrooms.

“ I have no doubt that it will be a very fine education campus. For Scoil Bhride and the Holy Family schools, they are facing into a situation where prefabs are a thing of the past, that is a big achievement. That is the first time in 40 years that we can say that,” he said.

Speaking on the site, he said it is five star standard.

"In the next two days we are looking forward to 1400 children being on this campus, between the Holy Family Junior and Senior Schools. We really are moving from one star accommodation to five star accommodation," said Msgr Byrne, who is also Chairman of the Board of Management.

Jackie Carroll is from McCarthy O'Hora Architects from Portlaoise who have led the project, which was build by Sammon Construction.

"We do a lot of school buildings around the country but to be able to work on one in Portlaoise has been fantastic. It's probably one of the bigger primary education campuses of its kind in the country," she said.

The new school has been long needed, with waiting lists still standing due to ongoing demand for places in the rapidly growing Portlaoise town.

During the boom the parish presented plans to the dept of education to fund the building of new schools, but this was turned down.

The last school to get a new building is now St Francis School for children aged 5 to 18 with learning disabilities.

“It is the last piece of the jigsaw. The department is saying it will open in September 2018 and I really hope we make that date,” Msgr Byrne said.