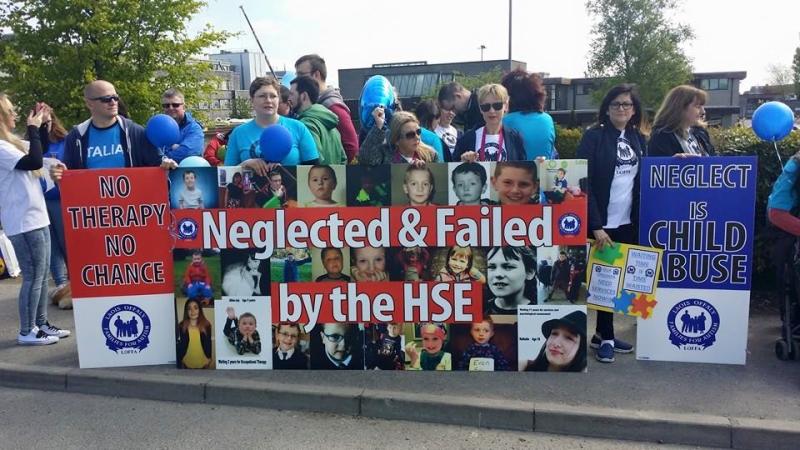 LOFFA protest for their children

A Portlaoise family, with two sons on the autism spectrum, has been on the HSE waiting list for occupational therapy (OT) for four years.

Orlaith O'Reilly has two sons with Autistic Spectrum Disorders (ASD) and another child who is not on the autism spectrum.

“I have two boys on the spectrum, both need occupational therapy, my older boy is 12 he is in a special school so he gets that in the school now but my younger boy Sean just turned eight and he needs occupational therapy he has not received anything from the HSE since he was four,” Orlaith explained.

“I have sent letters to the HSE and they reply saying that he got that pre school session.

“They do offer these advisory clinics where if I had a problem I could go in and speak to an occupational therapist and they would give me advice on what to do with it, so I have been offered that if I ring but never have I been offered a one to one which he direly needs,” Orlaith explained.

Private Occupational Therapy & How it helps

Orlaith and her husband have been paying for private OT, which can cost on average €65 per hour, with the help of Laois/Offaly Families For Autism (LOFFA).

OT helps children like Sean with every aspect of their lives. Orlaith has learned exercises that can calm Sean down when he experiences problems which cause him to have meltdowns.

“There are so many different things occupational therapy helps with, it would be the sensory impulse where if my boy was out of sync or something went wrong I would have to be shown techniques and exercises to do with him to bring him back down to normal.

“If something goes bad for us and we go out of sync, our brain is able to come back down to the neutral level itself but if you have autism, your brain, depending on how you are on that day, takes longer to come back to normal. I would do these OT exercises with him to help his with this.

“My older boy now to try to get him to put on a tracksuit or pair of socks would actually cause a meltdown because it is so hard for him or holding a knife and fork would be difficult for him. OT taught him all of the different things that we would take for granted,” she explained.

Let down by the HSE

Orlaith recently brought Sean to a private food group because he was finding it very difficult to eat.

At this food group, Sean's ability to cope with food and eating improved thanks to OT however, Orlaith and her family were told that Sean had problems with motor skills that they had not known about.

“We brought him to that food group we realised he had so many quirky problems we didn’t know about, I was heartbroken, I felt that I had failed him in some way even though I didn’t fail him, the HSE did,” she said.

“They all have their own needs and children do but if you have that input from the therapist every week it genuinely makes a difference to that child.”

“You are just on the list and the only way I find out about my movement on the list is by making the phone call to find out, it is shocking,” she said.

This comes as 1058 children between the ages of 5 and 18 wait over one year for their first occupational therapy assessment in Laois.

Laois autism charity LOFFA say that it is struggling under the pressure of HSE referrals.