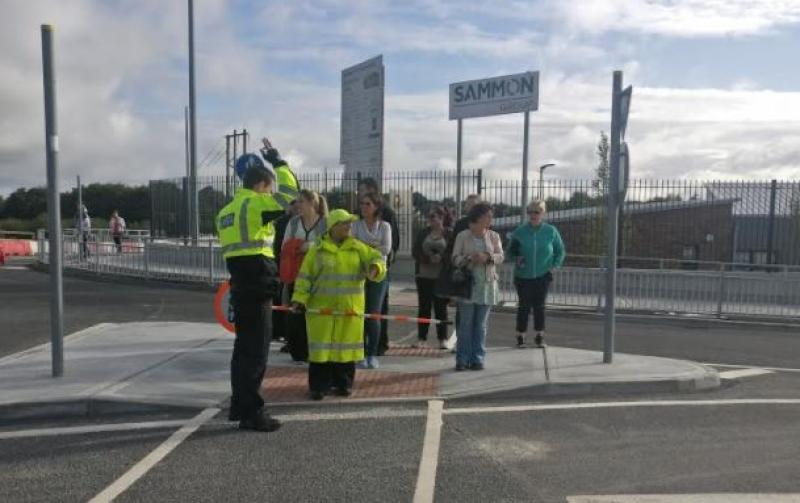 Gardai and the local traffic warden were directing traffic on the roundabouts at the entrances to the Holy Family Senior and Junior Schools this morning in Portlaoise.

Traffic was at a standstill on the Link Road which has affected traffic throughout the entire town.

It is understood that there were delays up to 40 minutes from the Mountrath Road to Lismard Industrial Estate through the town.

The brand new, state of the art Holy Family Senior and Junior Schools opened their doors for the first time to students from Portlaoise Parish today.

The two schools share one large campus on the Borris Road, Portlaoise.

While gardai were on hand to help with traffic this morning, it is understood that that commitment will not be there everyday.

He said that “hopefully” the traffic was only so bad due to the fact that all parents wanted to park up and go inside with their children on the first day.

“The traffic was a bit chaotic but hopefully that’s a first morning [thing].

“Every parent felt the need in both the senior and junior school to park up and try get a look and to leave their children in to be sure they knew where they were going but I think as the days progress there will be more just drop and go so that will help.

“We have the full perimeter open, there are a couple of bottle necks that we will have to address.

Lollipop ladies were in place at the entrances/exits of the school helping people cross the road by stopping and starting traffic.

Cars were parked on double yellow lines at the Link Road and all along the Borris Road and surrounding areas.

Fr Paddy Byrne said that traffic was so busy because of children starting school for the first time and it will pass.

“Even with the traffic congestion and Electric Picnic going on that too will pass because there is a curiosity, mammies won’t just let their children run in, they want to go and have a look so all of this will  be fine,” he said.

The starting times for children today were staggered for safety reasons.

For the first two weeks of school, junior infants will all finish school at 12.30pm and 1:30pm after that.

Junior infant students have to be collected by a parent in the classroom according to Antoinette Mc Gowan who brought her son Cian to school for his first day today.

“It will be fine once he gets a bit older it will be just dropping off and a collection point but at the moment I will be coming into the classroom to collect him, just because they are juniors the teacher physically hands them over, it will be fine,” Antoinette said.

This means that parents of junior classes will have to continue to find a parking space every day to go inside to collect their children.

The traffic is expected to worsen as 1,400 children are dropped and collected from school on Friday and Monday while 60,000 people descend on the country for Electric Picnic music and arts festival.