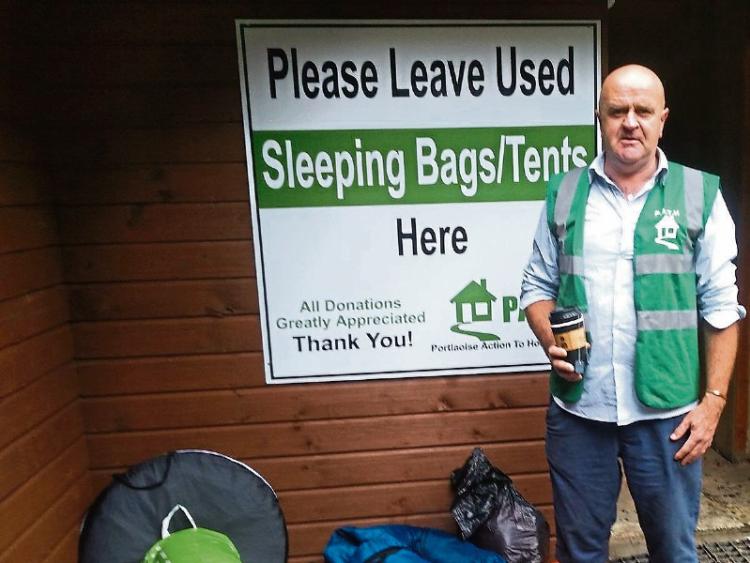 Tom Duffy is Laois Person of the Month for September

Community activist, Tom Duffy, a volunteer with Portlaoise Action to Homelessness (PATH) who organised the gathering of over 1,000 sleeping bags after this year's Electric Picnic for the homeless is the Leinster Express/Midlands Park Hotel/ Gerry Browne Jewellers Person of the Month for September.

Mr Duffy, originally from Ardoyne in Belfast, has lived in Portlaoise for over 20 years.

He volunteers with PATH regularly and is also involved another voluntary organisation called Feed Our Homeless Inner City Dublin, which was founded by Tony Walsh.

Tom spearheaded the idea of collecting the sleeping bags.

“This started when I put a post on my Facebook page with the idea of collecting sleeping bags after the Electric Picnic and asking people in the community to wash them and bring them back to me for our homeless friends who have to sleep on the streets of Dublin.”

Tom collected over 1,000 sleeping bags, ground mats and tents which were recycled for re-use. This number of sleeping bags is enough for PATH to bring to people every week until March, 2018.

Helping him were several PATH volunteers who were given access to the campsites. Many people also provided transport to get the bags back to his home in Portlaoise.

He was also helped by the Carter girls who run Supershots Paintball in Stradbally who allowed their facility to be used as a drop off point.

Hundreds of the sleeping bags went to PATH and many more were given to voluntary organisations that feed and clothe homeless people. Many went to Wexford, Cork, Kildare and several other places where people are sleeping rough.

Tom said he was overwhelmed by the way that people from all over Laois got behind the effort.

He hopes that this year's effort will be the pilot for an annual event for PATH.

“Next year we could be much more prepared and be ready with 30 volunteers and make a massive sweep inside one good day.”

Operating from Portlaoise, the PATH group is the only mobile group in the country.

It uses two custom made carts which volunteers and committee members push around the streets of Dublin every Saturday night seeking out homeless people to look after them, and covering up to 10 kilometres on foot.

Old Portlaoise convent is being considered for council housing tenants.