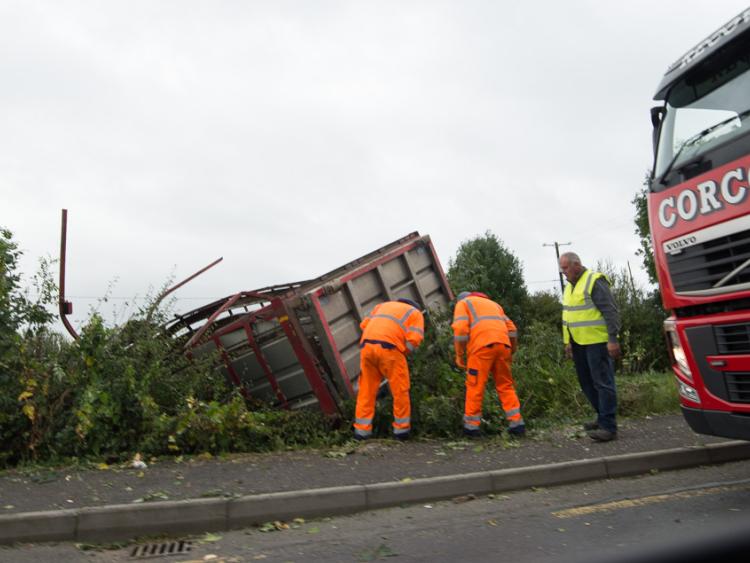 Scene of the recent accident at The Rock, Mountmellick, pic by Denis Byrne

A speed limit of 30km/h is set for the road near the Rock National School in Mountmellick, an area where lorries would “shake you” as they drive past and where a cattle truck recently went off the road terrifying locals.

The news came at today’s meeting of the Portlaoise Municipal District in County Hall, where four separate councillors proposed motions calling on increased traffic calming and more policing of the situation.

“Lorries would shake you when they speed past you,” said Cllr Catherine Fitzgerald, who proposed meeting with the principal and representatives from the Rock NS regarding safety measures.

She said that people had been terrified when a lorry overturned, but thankfully this didn’t happen during school hours. She added that a 30km/h limit would have to be policed and asked that the councillors meet with the gardaí.

“Word would spread if people are fined,” she said.

Cllr Caroline Dwane Stanley, who called for the installation of periodic school signs and additional road safety measures, said there had been problems there for years and huge issues with speeding.

She said there had been a few accidents recently, with a cattle truck going off the road, and suggested that perhaps a pedestrian crossing would provide some assistance at traffic calming.

Cllr Mary Sweeney, who called on the council to examine further safety measures, agreed that the speed limit would have to be “forcibly enforced” and said that the Rock NS had been writing letters to the council on the issue since five or ten years ago.

And Cllr Noel Tuohy, who proposed a motion calling on the council to consult with the gardaí to consider further road safety measures, said that the rumble strips on the road needed to be remarked on a regular basis due to the heavy traffic on the road.

Cllr Jerry Lodge added his support to his fellow councillors’ motions, saying that the new speed limit would be meaningless without proper policing.

In response to the motions, a written reply was furnished from Farhan Nasiem, acting senior executive engineer. He said the installation of periodic speed signs on the R422 in the vicinity of the Rock NS commenced this week and it is expected that the signs will be operational within the next two weeks.

The signs will impose a 30km/h speed limit at the times for drop off and collection of children.