Mountmellick flooding is worst I have seen in town - Flanagan 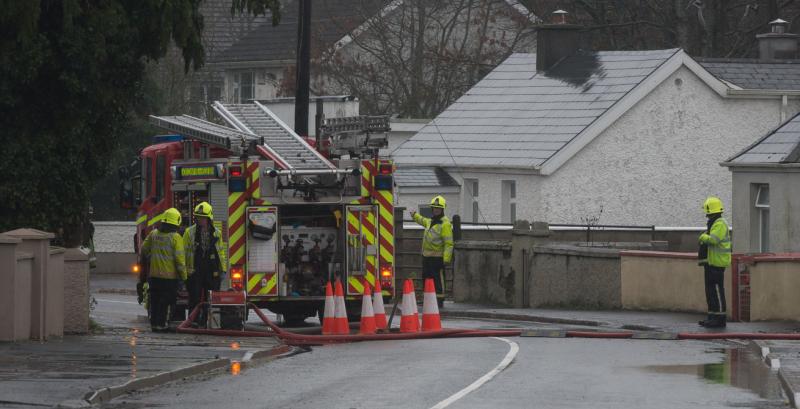 A fire crew at work at Acragar, Mountmellick

The Minister for Justice and Mountmellick native, Charlie Flanagan said that Wednesday's flooding of the town was the worst he had seen.

"I remember a big flood in 1968 and again in 1990. I think this is worse for two reasons. Firstly, the concentration of the rain and secondly it happened really without notice.

"There was a concentration of intense rain in the Slieve Blooms, it flew off the mountain.

"I have been around town and the damage is dreadful, especially to Manor Road, further up Cloncannon and Davitt Road.

"We have seen Inishowen and we have seen Mountmellick this year. The first lesson is to ensure that local authorities have the emergency crew which we saw rolled out here last night. All counties need to have this because we don't know when or where weather will strike. It is a natural disaster."

Minister Flanagan said he had spoken with Minister, Joe McHugh from Inishowen in Donegal where they had similar type flooding and a relief effort in August. They are issuing advice from their clean up to Laois County Council as to how the clean up can be run, based on how they did it.

"I feel very bad for the people of Mountmellick. There is a huge level of community support here, there was a huge reaction straight away. That community support is extremely valuable. I was in Dublin yesterday evening, I called together Ministerial colleagues so there will be national assistance from other adjoining counties.

"I was speaking to fire men who were pumping water all night. It was a big effort but, of course, even though there was a great community effort people have suffered real loss and damage. I think the important thing now is that this morning we have the Department of Social Protection, Laois County Council, the Army and Civil Defense here. What we need to do is assess the damage, get people back into their homes, get houses dried out as quickly as possible.

"People need emergency food, emergency clothing, shelter and then the provision of skips, and dehumidifiers for houses."