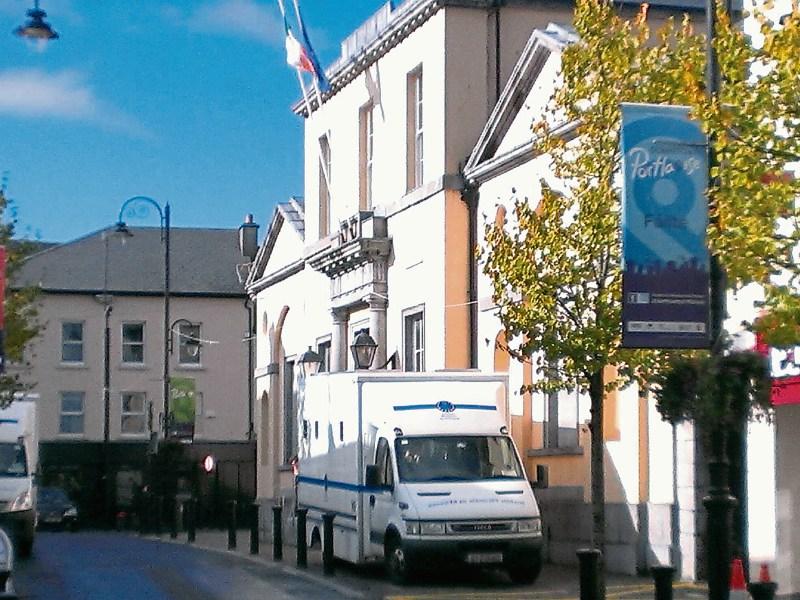 A Portlaoise man who held a knife to a priest's throat for some 25 minutes during a terrifying aggravted burglary at the local parochial house has been jailed for seven years with a portion of the sentence suspended.

'An attack on the fabric of civil society,” was how Judge Keenan Johnson described the actions of John Lewis (28), St Brigid's Place, Portlaoise.

At the recent sitting of Portlaoise Circuit Court, Lewis pleaded guilty to aggravated burglary, at Portlaoise Parochial House on July 18, 2015.

The accused and another male called to the house at 11.30pm on the night, where they encountered the sole occupant of the house, a locum priest who was looking after the parish while the regular clergy were away on pilgrimage.

The two robbers had their faces covered and were armed with knives and the accused put the knife to the priest’s throat and pushed hard enough to hurt him.

The priest was frightened and crying and begging the robbers to leave, but they kept demanding money and told him he would be killed if he didn’t give them any. His pockets were searched and he was brought upstairs, while the accused kept the knife against his throat. The robbers stole €300, a HP laptop valued at €750 and a phone valued at €300 from upstairs, then brought the priest back downstairs with the knife still against his throat. Downstairs they located another laptop which they stole,

The priest shouted at them to leave him alone and said he didn’t have any more money. The accused then hit him on the head and the robbers sked for more money and he told them he didn’t have any, to which Lewis then grabbed the priest’s hand and cut his thumb with the knife.

The priest later told gardaí that he feared his thumb would be cut off and he was in a lot of pain. The robbers then stole a bicycle from outside and made their escape.

The incident lasted approximately 25 minutes and the priest sustained injuries to his neck and thumb. There were three surface scars on the right side of his neck, inflicted by the knife which the accused had.

In a victim impact statement, the priest said he found the incident extremely shocking and he still has visions of it. He describes being scared when he thinks about it and being left in great despair, anxiety and fear. He felt totally helpless while the knife was held to his throat for 25 minutes, and indicated that he wanted to leave Ireland as early as possible after the incident.

In sentencing, Judge Johnson said: “It is shocking to think that somebody who was a visitor to this country should be subjected to such a frightening experience… The actions of the accused and his accomplice have seriously undermined the respect and trust that members of the caring professions including the clergy are entitled to expect and as such constitute an attack on the fabric of society.”

The judge noted that the priest had since made contact with the accused and forgiven him for his offending, urging him to embrace a new life which is crime free.

“He is clearly a person who not only preaches the gospel, but lives the gospel by displaying the virtues of forgiveness and generosity,” said Judge Johnson, adding that he wished the priest well and wanted to assure him that “the terrifying experience he endured is not a true reflection of Ireland and its people”.

Judge Johnson said it was clear that the primary cause of the accused’s offending had been drug abuse.

The accused had ten previous convictions, two of which were theft matters committed approximately 18 months after the aggravated burglary.

The judge said that the fact the accused had been involved in further offending subsequent to this offence had to be deemed an aggravating factor.

“The fact that the offence took place at the residence of the victim is a further aggravating factor,” he said.

“Citizens are entitled to feel safe in their homes and the type of offence to which the accused has pleaded guilty causes distress and alarm to the wider community and in particular vulnerable adults who are living on their own,” said the judge.

Judge Johnson imposed a sentence of seven years, suspending the last two years for a period of seven years, on condition the accused enter into a peace bond; he submit himself to probation supervision for 18 months post release; he complete a residential drug treatment programme; and he remain drug and alcohol free and provide urinalysis.

The sentence was backdated to the date the accused went into custody, April 11 last.