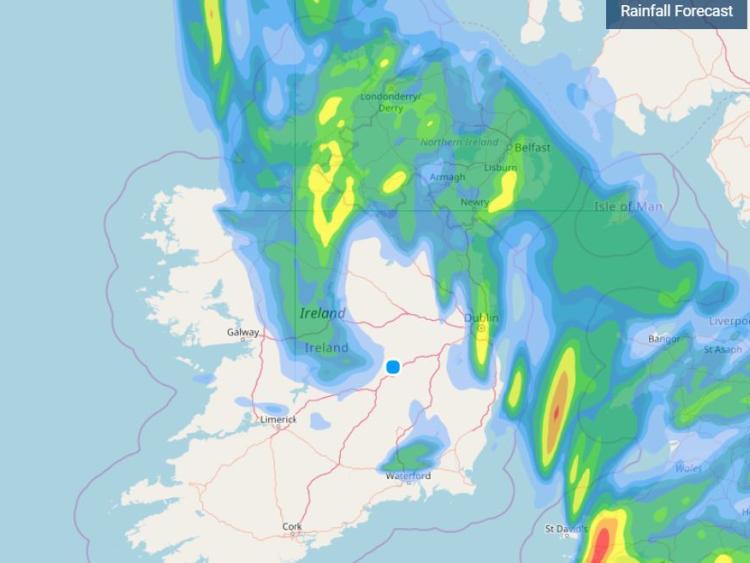 Met Eireann has issued a status yellow rainfall warning for counties surrounding Laois with a risk of spot flooding.

The warning is valid for all of Munster, Dublin, Carlow, Kilkenny, Wexford, Wicklow, Galway and Mayo from 2.00am on Tuesday until 2.00pm on Tuesday.

Heavy rainfall between 20-30mm is expected to fall over a short period, leading to some surface flooding. Higher totals are expected in mountainous areas.

This rainfall warning was issued at 9.00am on Monday. Southeast winds will increase to reach gale or strong gale force on Monday night on coasts from Mizen Head to Slyne Head to Rossan Point, extending to all coasts overnight.

Scattered showers will affect some southern & eastern counties today but it will be generally dry elsewhere. It will be predominantly cloudy but sunny spells will develop, the best of these in the west. Afternoon temps will range 6 to 10 C in mostly light east or southeast winds pic.twitter.com/8do47IjB9D

In Leinster on Monday there will be sunny spells and isolated showers with afternoon temperatures between 6 and 9 degrees in mostly light east or southeast winds.

Winds will freshen in the evening becoming moderate to fresh southeast then strong overnight. It'll stay mainly dry overnight with lowest temperatures between 1 and 4 degrees.

Tomorrow, Tuesday, rain will spread quickly from the west, turning heavy with the risk of thunder for a time, before clearing to dry and sunny conditions for the afternoon. Highest temperatures will once again be between 7 and 10 degrees and strong southeast winds will veer southwest and ease with the clearing rain.

Another band of rain will arrive in the southwest of the country by the end of the day.

Read also: Down Syndrome Ireland Laois 'over the moon' about award win.