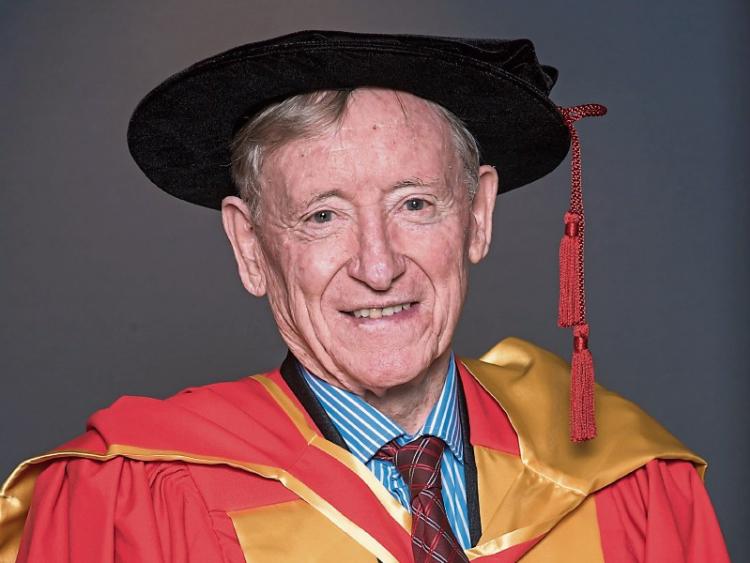 At the May graduations of the Australian Catholic University, Laois man, Bro Aengus Kavanagh was awarded an Honorary Doctorate for almost 60 years of outstanding service to Catholic school education.

He has been a teacher, a school principal and a Diocesan Regional Director of Catholic education in Sydney.

He holds post-graduate degrees from three different universities and is a Fellow of the Australian College of Educators.

To quote from the conferral address:

“Brother Aengus Kavanagh is an Irish-born Patrician Brother who came to Australia more than 60 years ago. In the ensuing decades, Brother Aengus has made a monumental contribution to Catholic schools.

“He has been part of the transformation of Catholic education from its humble origins in this country to its current status as a confident and respected sector in Australia's education landscape.

“Brother Aengus spent his first 22 years in Australia with the Patrician Brothers College in Fairfield, where he assumed various roles, including 13 years as principal.

“Thanks to his hard work and dedicated service as a Catholic educator, Brother Aengus was invited to join the Sydney Catholic Schools Office in 1981.

“There, he was to play a leading role in the decentralisation of the archdiocesan system of education into five regions and was appointed the inaugural director of Sydney's outer west region of Catholic schools. This region later became the Parramatta Diocese.

“In 1986, Brother Aengus was elected as international head of the Patrician Brothers, leading him to work with staff in Catholic schools in Ireland, India and Kenya. Brother Aengus' impressive collection of academic qualifications began with a Bachelor of Science at the National University of Ireland.

“Among his inspiring achievements, Brother Aengus was a co-founder of the residential program called ELIM and remains its organizer and coordinator to this day.

“The program was established as an in-depth professional learning and formation experience for Catholic school leaders. Over the years, principals from Catholic schools in every diocese in New South Wales have participated in ELIM .

“In the late 1990s, the Australian Catholic University established a symbolic presence in Sydney's outer west, constructing a demountable classroom in Mount Druitt. For a while, this venue was the setting for step-up programs for Catholic school students contemplating enrolment at university.

“Brother Aengus was part of the planning committee for this venture. With the passing of time, the Parramatta Catholic Education Office built several additional facilities on this site.

“It is now a popular venue for meetings, and for professional learning for staff of Catholic schools in the diocese. It is named the Aengus Kavanagh Equity and Education Centre.

“Brother Aengus has also served as a coordinator of the Master of Educational System Leadership, which was offered for two successive cohorts by the Australian Catholic University.

“Through the Catholic Education Office in Parramatta, Brother Aengus was head of the division of Professional Learning and Leadership for 10 years and subsequently worked in adult faith formation with school staff and leaders.

“In recent times, Brother Aengus co-authored a book with Ursuline Sister Leone Pallisier, called 'Will Catholic Schools be Catholic in 2030?'

“In it, he confidently proclaims that Catholic schools will continue to present a positive face of the Catholic Church in 2030 and beyond.