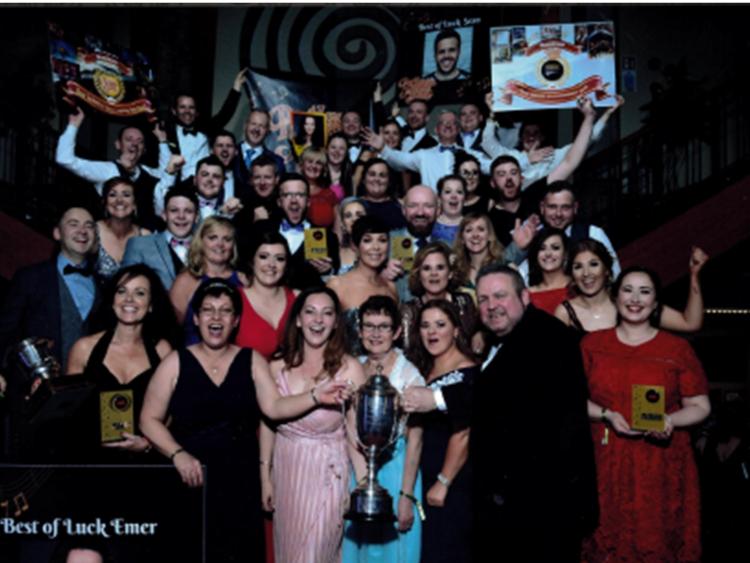 Portlaoise Musical Society celebrating their win their production of Titanic: The Musical

Portlaoise Musical Society cruised into one of the top spots at the recent Association of Irish Musical Societies (AIMS) awards, when their production of Titanic scooped best overall show in the Gilbert section.
The 20th annual show by the local group entertained packed audiences when it staged at the Dunamaise Arts Centre at the end of last year and the group are now celebrating their win at the AIMS awards, which took place on June 15.
40 members of the society descended on the Gleneagle Hotel Killarney that night for the most exciting weekend in Irish musical theatre.
The group picked up two awards, with Emer Hartnett winning the title of Best Musical Director, and were also nominated for ‘Best Programme’, ‘Best Front of House Management’, and ‘Best Technical Show’’. The excitement in the society was colossal as this was the most nominations the society had ever received for a show.
The group were announced as runners up in ‘Best Programme’, ‘Best Front of House Management’ and ‘Best Technical Show’.
Sharon Dunphy, chairperson of Portlaoise Musical Society said: “The society would like to thank all the people in Portlaoise for their support especially the businesses who have long sponsored the society. Thanks to all the people who have come to see our shows over the years, without you, the show would not go on. Huge thanks goes to the Dunamaise Arts Centre who provide us with a most beautiful facility to stage our production and we are very fortunate in this town to have such a state of the art theatre.”
Titanic: The Musical was a huge success at Dunamaise Arts Centre at the end of last year, with all eight performances sold out throughout its run and over 1,900 people attending as audience members and were deeply moved by the astounding production that Portlaoise Musical Society presented.
The musical with its 70 plus strong cast was an enormous community project with people locally and further afield providing help to make it happen.
Children from various local primary schools took part in the show and the society was fortunate to have a project from students in Portlaoise College decorating the front of house, along with an exhibition of authentic artefacts borrowed from Abbeyleix Heritage House and an enormous display of the more than 3,000 passengers and crew list including the 1,500 names of the people who lost their lives on Titanic.
Four wonderful musicians from the Laois School of Music played for many patrons as they entered the Dunamaise Arts Centre.
In November 2019, Portlaoise Musical Society will present Ragtime, a musical based on the 1975 novel by EL Doctorow which tells the story of three groups in the US in the early 20th century.