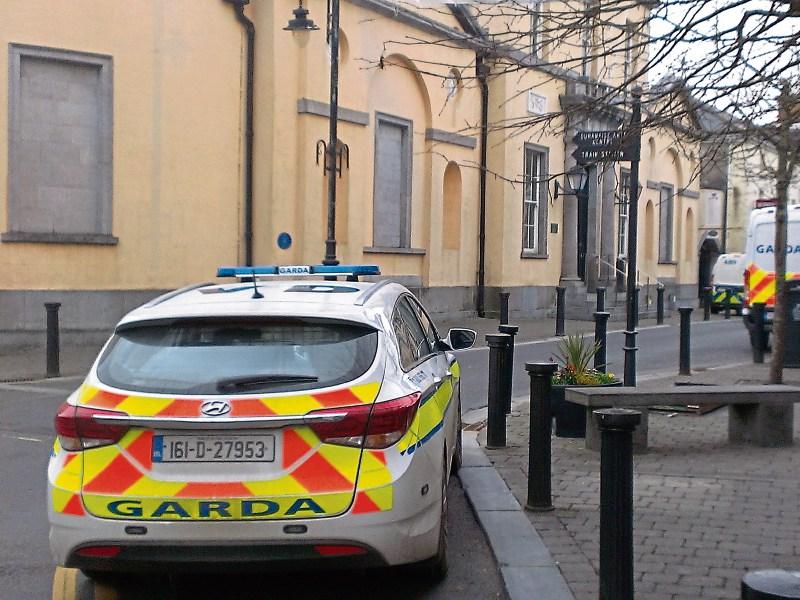 An armed garda response unit had to attend the scene of a disturbance in Durrow, after a 30-year-old man allegedly threatened his mother with a knife before smashing the wing mirror of a car with a golf club and then threatening to strike a garda with a rock.

At last week’s Portlaoise District Court, Bryan Gilmartin, 30, of Derrin, Durrow, was charged with being intoxicated in public, threatening or abusive behaviour, criminal damage, and an offence under the weapons and firearms act, on July 14.

Detective Garda JP O’Brien said there was a State objection to bail.

He gave evidence that on July 14 last, gardaí were called to the home of the accused as his mother alleged he had a knife and threatened her.

Det O’Brien said the accused was in the road with his top off when gardaí arrived. He allegedly threatened the gardaí with a golf club, before he allegedly smashed the wing mirror off a car.

Det O’Brien said the gardaí had to request armed response to deal with the situation and all traffic had to be diverted.

The detective further gave evidence it was alleged the accused then went into a field, picked up a rock and threatened a garda with it.

Det O’Brien said he told the accused he would be pepper sprayed. He alleged that the accused was intoxicated and foaming at the mouth, and he allegedly threatened the gardaí throughout.

Det O’Brien said that the accused was not welcome at home. He said it was alleged the accused’s parents were in extreme fear of him.

Defence, Mr Barry Fitzgerald said his client would deny threatening his parents and he enjoys the presumption of innocence.

He asked the court to grant bail on strict conditions.

Judge Staines granted bail of €100, with an independent surety of €1,000. The accused was told to provide an address to the gardaí and to stay away from his parents. He was also told to sign on at the garda station.

The accused was remanded in custody with consent to bail, to appear back before the court on August 1 next.