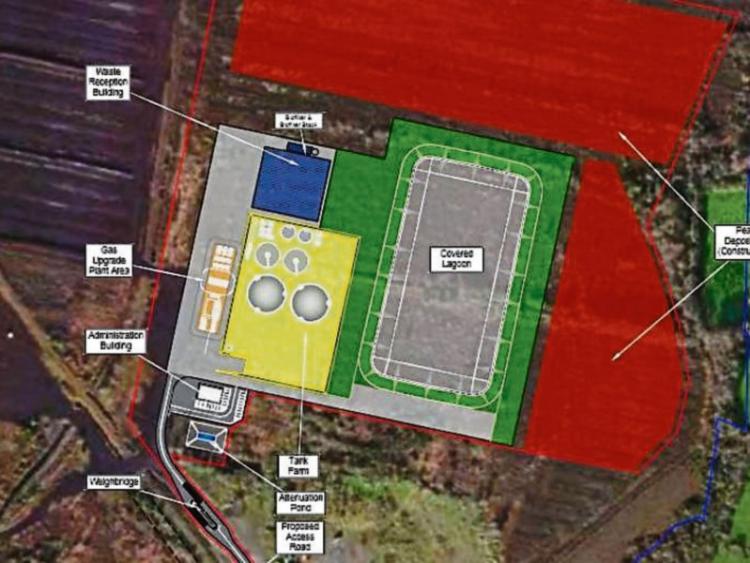 Portlaoise could become the rubbish store of Europe if plans go ahead for a new Bord na Móna processing plant on the outskirts of the town, which will take in waste products not just from the rest of Ireland but other European countries as well.

That was the stark warning that went out at the recent public information evening held in Portlaoise Parish Centre by the Portlaoise Action Against Bog Superdump group. A packed gathering listened to a presentation by Ms Ann Byrne, along with fellow committee members Ms Collette Duff and local councillor Ms Thomasina Connell, outlining Bord na Móna’s plans to build its first anaerobic digester gas plant in Portlaoise.

The company, which owns the AES waste collection service, plans to produce the gas by rapidly decomposing organic waste at the facility.

The proposed site for the new plant is at the Coolnamona boglands, Togher at the Mountrath Road, Portlaoise just off the Junction 18 interchange on the M7 motorway.

Ms Byrne said an anaerobic digester has pluses in and off itself, but the group have an issue with the location. She said the site had been selected due to its proximity to Bellingham which uses gas, so it’s a money-saving decision by Born na Móna who will connect the new plant to the existing gas network by laying 2.3km of new gas pipework from Bellingham along the regional road.

Bord na Mona will need so much waste to run the plant they’re going to have to import it from around Ireland and the rest of Europe.

“Do we want to be known as somewhere that houses Europe’s rubbish?” she asked.

She also said that Deputy Sean Fleming had pointed out to Bord na Mona representatives that it would take 55 million litres of water a year to run the plant and when he asked them where they were going to get the water they didn’t have an answer.

Ms Byrne said that the recent climate action bill deals with getting rid of oil and gas, so it was a contradiction to have the plant built by laying down gas piping.

Concerns raised by the group are the noise levels and vibrations from lorries; smells and odours; the environmental and health concerns due to the use of chemicals; the possibility of devaluing property; impacting tourism; the increase in vermin; the release of carthenogenics; and the effect on the wildlife, flora and fauna.

A member of the public pointed out that an additional concern is the possibility of fly infestation.

“If a million bluebottles start blowing into Portlaoise it will affect everybody,” he said.

A woman pointed out the dangers of spillages on the roads from the lorries. “If you’re braking, you’re going to go flying on,” she said.

“It’s important to point out that there has been an unauthorised development on that site for two and a half years and it’s still ongoing, they’re mulching timber on the site without any planning,” said another man.

He also mentioned a recent report which indicated that the future of Bord na Mona is going to be a low carbon company, and remarked: “I think the carbon footprint is quite high if you’re moving that amount of slurry.”

“If they put down a well there are they going to drain all the neighbours?” asked another member of the audience.

And another man pointed out that when it’s running there are only going to be five or six staff needed, meaning there is not even any employment benefit to the county.

Deputy Brian Stanley attended the meeting and he encouraged everyone to put in their own submissions to Laois County Council objecting to the plans.

“I’m saying this as a former worker of Bord na Mona, this isn’t on where it is,” he said. “Any question of importing waste is out of the question. We don’t want Laois to be the bottom of the slurry tank.”

He confirmed that he and his wife, Cllr Caroline Dwane Stanley, would also be putting in a submission.

There is a Facebook page, Portlaoise Action Against Bog Superdump and an associated GoFundMe page. Ms Byrne said that it could cost really good legal advice to help fight the plans, especially if the case goes to An Bord Pleanala.

The group have been holding weekly meetings and all seven councillors on the Portlaoise Municipal District have backed them.

Ms Byrne implored all present to lodge a submission with Laois County Council before the deadline of this Wednesday, October 23.

Ms Connell said that if anyone present at the meeting wanted to fill in a template submission and pay the €20 fee that night, she would bring in the submissions to county hall.

It was asked whether anyone from Bord na Mona had attended any of the group’s meeting, and when it was revealed that they had not someone suggested that this point be highlighted in all submissions.