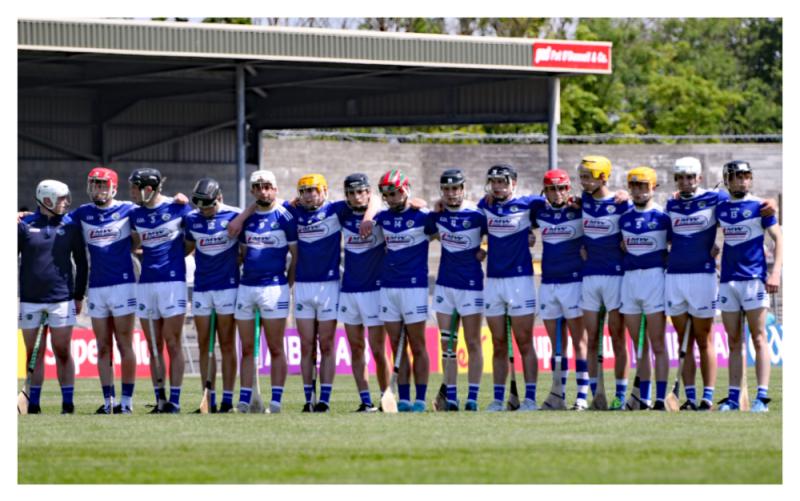 A blustery sunny day in Cusack park was center stage for the last quater final round-robin game of the minor hurling championship. Laois lined out with the same fifteen that started the game against Galway. As the game got closer to throwing in, a big portion of the A-D section of the main stand at Cusack park was filled with a sea of Blue and White traveling fans. A great sight to see.

From a Clare perspective, there was one change from the starting 15 that were defeated by Galway by a wide margin two weeks ago. Cian Neylon Replacing Piaras O Shea.

Clare had a fantastic start to the game and raced into a four-point lead after five minutes. Laois had a couple of wides in the duration period but on ten minutes Jack breens long-range effort went over the head of Clare goalie Mark Sheedy and nearly ended up in the net. The post denied Laois an early goal. Ben Deegan got Laois off the mark from a free.

All Ireland Minor Quater Final Round 3

However, with the wind at their backs, Clare continued to advance and increased their lead with some great points from Sam Scanlon, Oisin Whelan. and Jack O'Neil. Diarmuid Stritch was having a fantastic game for the banner county in midfield and was cleaning up loose balls and stopping most Laois advances.

Five minutes before the break Clare corner forward Cian Neylon was clear through on goal but keeper Brochan O Reilly pulled off a brilliant save to deny Clare the goal. Jer Quinlan and Ben Deegan would get two more points before halftime. However, it was during this period that Clare kicked on and at half way mark they had a convincing lead of fourteen points to five

The teams traded scores for the opening fifteen minutes of the second half. Ben Deegan converted all but one of Laois's scores during this period, while midfielder Eoin Cuddy chipped in with a point. Clare maintained their strong lead with points from Sam Scalan, Oisin Whelan, Michael Collins, and James Organ. Brochan O Reilly pulled off two massive saves, the first from Sam Scalan and the second from Cian Neylon to keep Laois in the game.

Around the 45-minute mark, Laois won a free on the Clare 21-yard line. Ben Deegan blasted it past the numerous Clare defenders on the line for a goal. This reduced Clare's lead back to six points. Laois then converted two unanswered scores and they were looking much the better team for the next ten minutes. Towards the end, Clare pulled away once again and solidified their place in the All Ireland Minor semi-final. A huge performance from Laois in the second half wasn't enough but they can be very proud of their exploits this year. Well done lads.