Laois will emerge victorious in All Ireland showdown. 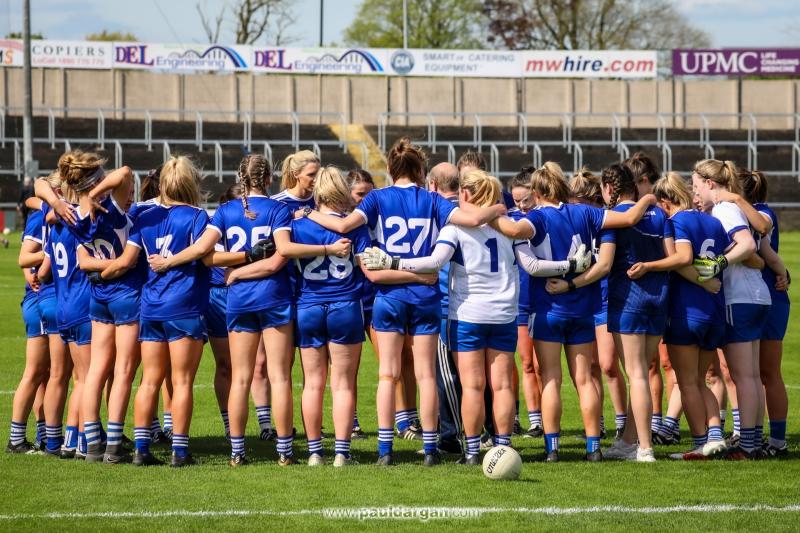 In 24 hours time Laois will compete in the All-Ireland Intermediate Ladies Final. A historic day for the
O’Moore Ladies. The last time they contested the Intermediate showdown was in 2000 when they
defeated Cork. They would go on to lift the Senior All Ireland title 12 months later. This time around
they face Wexford. A team that they know very well having been defeated by them in the 2021
semi-final and again this year in the Leinster semi-final

Familiar Faces and closing out games.

Despite being on the wrong end of the past two championship meetings between the sides, there is
a sense that Laois have improved in abundance since. The last time the two teams played each other
was back in early May. That day Laois let an 11-point lead with 25 minutes to go slip. They lost by
two points after extra time. However, last time out in the All-Ireland semi against Clare we saw a
much more resilient Laois team. Having been 5 points up in the final quarter, Laois looked to have
the game put to bed but Clare fought back and Laois had to face Extra time once again.
There was to be no slip-up this time as Mo Nerney’s fantastic contribution of 1-14 was a significant
factor in the Laois emerging victorious. There was a lot to like about the determination that Laois
showed that day. If Laois are in a position where they are a couple of points left in the final stages of
the game on Sunday, they now know they have the ability and composure to close out the game. A
lack of that knowledge was almost certainly a factor in the Leinster Semi-Final and it seems as if the
Laois team have learned from that experience.

In the three games previous to that win over Clare. Laois had some very impressive wins over Sligo,
Tyrone and Wicklow. Throughout the three games, Laois put up a massive combined scoreline of 15-
53. 13 different players contributed to that tally. On them stats alone it is clear that Laois’s firepower
and accuracy in front of goal are ridiculously good. However, that being said there is a few particular
star forwards that stand out.
Mo Nerney’s seasonal tally of 6-36 shows you the influence that the stalwart of Laois Ladies football
has. In the past, Laois Ladies would have been accused of relying heavily on the Timahoe woman.
This year has proved that when Mo has quality forwards around her and is receiving great service
from those playing further back the pitch, she can be absolutely lethal. There is a real argument to
be made for Mo being one of if not the most influential players in Ladies’ football right now.

Erone Fitzpatrick is another player that stands out amongst the girls wearing blue and white. Even
though she has been a constant contributor to Laois’s success this year, Fitzpatrick’s finest game was
without a doubt the All-Ireland Quarter-final against Wicklow. Within 7 minutes of that game
starting, Erone Fitzpatrick had scored a goal and had set up two more. This performance led to
Erone being crowned as the LGFA Player of the Month for June. There is so much to like about how
Erone plays the game. She is absolutely lightning quick. Her vision to pick out a player in a better
position is second to none. She has an incredible ability to always make the right decision on the
ball. And if that wasn’t enough, she has great determination to track back and do her bit when the
team are under pressure. Erone will most certainly play a huge part in the game on Sunday. 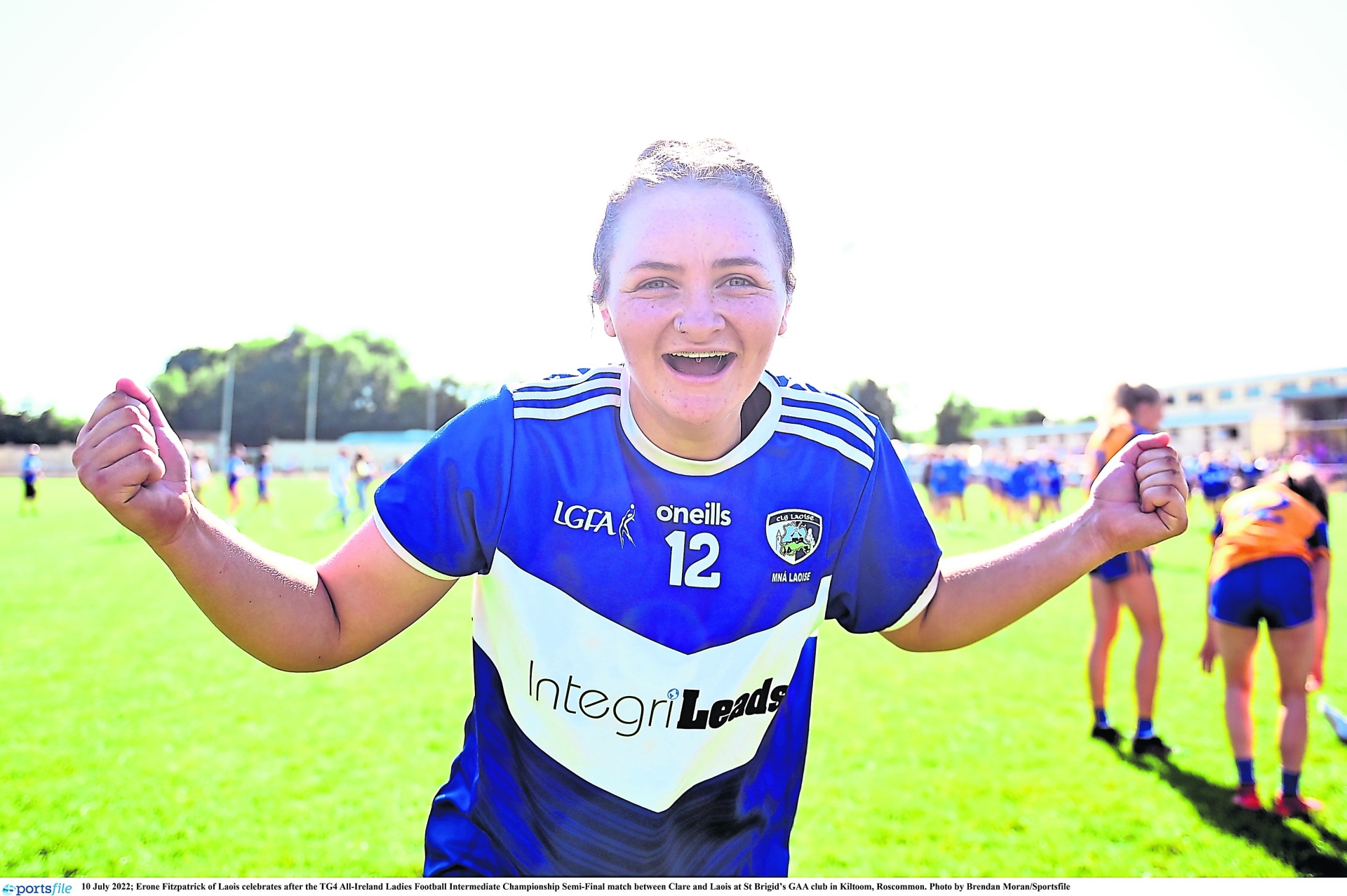 From a defensive point of view, Laois have had its ups and downs throughout the year. However,
they have shown in recent games a real togetherness when implementing a solid defensive
structure. In the three games mentioned above where Laois racked up 15-53, they only conceded 3-
22. Conceding 2-19 against Clare the last day can be forgiven but the worry around that game
defensively lies in the final quarter of normal time. Laois conceded 7 points and only got 1 point for
themselves.

A key player in keeping the defence organised particularly in the closing stages will be cornerback
and captain Aimee Kelly. Aimee will need to be vocal and lead by example if things start to go astray.
All that being said when Laois implement their defensive system, they do it very effectively. Many of
Laois’s attacks start with turnovers and midfielder Jane Moore is usually at the heart of it. She is
constantly the instigator of attacks as she often picks up loose balls and efficiently plays a dangerous
pass. She is also excellent at catching balls from kick outs and commencing dangerous plays that way
too.

A Glance at the opposition

Credit must be given to Wexford in how they battled back in that Leinster semi-final but as far form
since then goes, things look quite ominous for the yellow bellies. There are no signs that Wexford is
anywhere near the O Moore Ladies since that semi-final. They bundled their way through the All
Ireland series by beating some poor teams along the way and not very convincingly, at least in
comparison to how Laois have gone about their business. The five-point win over Wicklow
particularly stands out giving Laois annihilation of the same opposition on a bigger occasion too.
They were impressive against Roscommon in the semi-final but the tougher test that Laois got
against Clare will stand to them a lot more than the training game that their counterparts got.

Battle of the Aisling’s

Laois has Erone Fitzpatrick and Mo Nerney. Wexford has Aisling Murphy. She fired four goals past
Roscommon in the semi-final. She has been their go-to player all year and is a constant threat from
Full Forward. The task to nullify Murphy will almost certainly lie with full-back Aisling Donoher.
Aisling is very strong and on numerous occasions this year has dominated the last line of defence.
She’ll need to get the upper hand on Murphy very quickly and even though Donoher wasn’t marking
her that day, she’ll certainly is aware of the threat that Murphy can be from minute one. However, I
think Donoher is up to the task. If she comes out the better in the battle of the Aisling’s, it will be a
huge deciding factor in the game.