RACING: Your betting guide to Day 1 of Royal Ascot on Tuesday 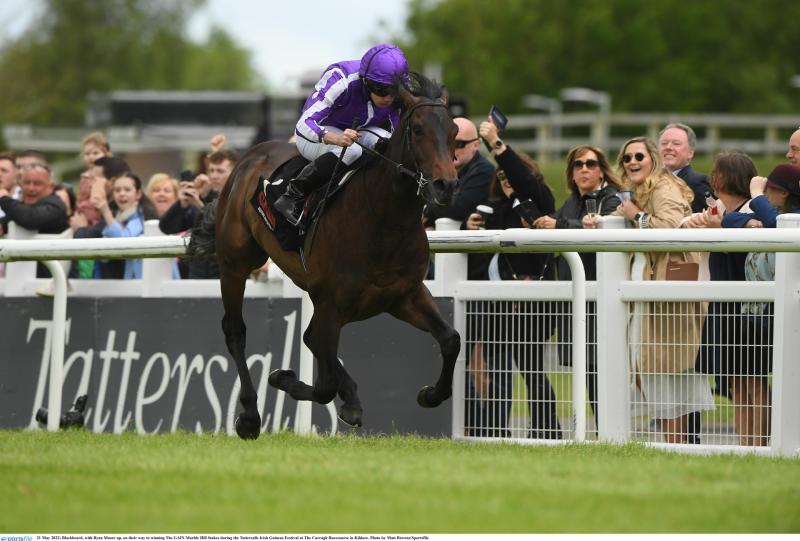 Blackbeard in action at the Curragh PIC: Sportsfile

Day one of Royal Ascot takes centre-stage on Tuesday afternoon with the five-day extravaganza once again living up to its billing as one of the best weeks of racing in the calendar year.

Tuesday’s card sees three Group One events take centre-stage, with the sport’s latest superstar Baaeed running in the meeting’s curtain-raiser for the Queen Anne Stakes. We have previewed the action with our race by race guide and you can find the best odds at Betfair

Hard to look past the unbeaten Baaeed in the opener. He has looked brilliant in all seven of his starts, including when scoring over course and distance in the QEII in October. He was spellbinding in the Lockinge on his reappearance and he is taken to justify cramped odds.

Persian Force is deeply respected having impressed on both of his starts, whilst debut scorers Bradsell and Harry Time are others to watch. Royal Scotsman could not have been more impressive at Goodwood last time out, but the finish can be fought out between Age Of Kings and Blackbeard for Aidan O’Brien. The latter has looked a potential superstar in three starts to date and gets the vote.

Golden Pal is one of the world’s most exciting sprinters as advertised by his brilliant win in the Breeders’ Cup Turf Sprint in November. However, he is yet to win in two starts in England and is taken on with Aussie raider Nature Strip. He returned to winning ways at Randwick last time out and whilst he is maybe not the force of old, he remains a seriously classy sprinter for Chris Waller.

Tough to look past Coroebus in this event. He was brilliant in the 2000 Guineas at Newmarket and whilst it will be interesting to see him round a turn, he is taken to come out on top here.

Exciting hurdler Pied Piper reverts to the Flat here and is respected for Gordon Elliott along with the Willie Mullins-trained Bring On The Night. However, Surrey Gold is improving with every start and gives the impression he will relish this step up in trip.

Defending champion Juan Elcano shaped with promise on his return to action and has to be towards the top of the shortlist, along with Cadillac who impressed when returning to the pick of his best form with success at Leopardstown last time out. Foxes Tales is another course and distance scorer, but Majestic Dawn impressed when landing a Listed event last time out despite pulling hard and if able to get loose off the front, he could be hard to peg back here.

Okita Soushi is a fascinating runner for Joseph O’Brien after just three runs and he looks sure to build on a second-placed effort in Listed company at the Curragh on his comeback. However, preference is for Cleveland. He excelled when winning the Chester Cup last time out under a brilliant ride by Ryan Moore and he should prove eqaully effective dropping back in trip in the finale.