Laois Jobs Fair attracts some 1,000 jobseekers for hundreds of jobs 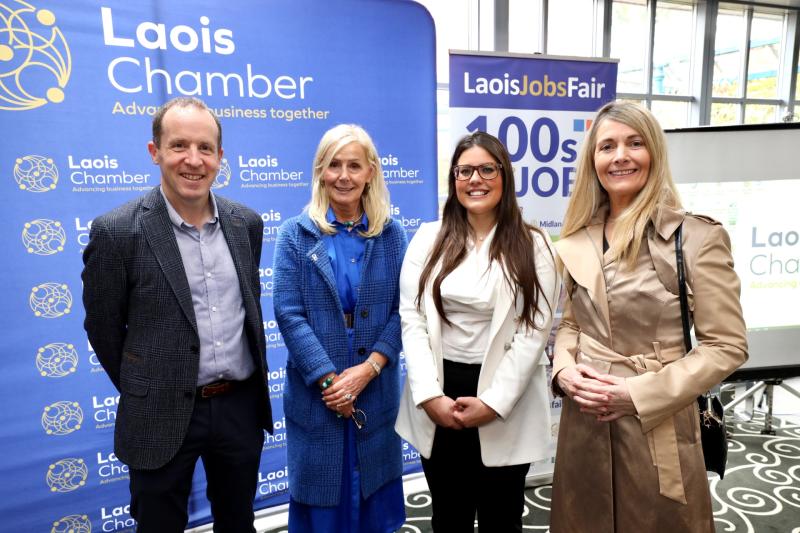 Some of the Laois Chamber team at the Laois Jobs Fair. Pic Alf Harvey

Hundreds of job seekers descended on Laois in search of a  fresh start at the second annual Laois Jobs Fair which according to the President of Laois Chamber is a chance to showcase Laois to people who want to live and work in the county.

"It has been a great showcase for the county with so many companies exhibiting," said  Caroline Hofman, CEO of Laois Chamber.

She said upwards of 1,000 job seekers had registered with Laois Chamber in advance. She added that the venue had reached capacity in terms of companies that could be accommodated. Laois Chamber said before the event that 100s of jobs were on offer.

By 3pm, Ms Hofman said a lot of CVs had already been left with exhibitors. She said a substantial attendance was also due after 6pm especially from commuters. She said the event showed that there are many opportunities close to home for people who leave the county each day for work.

Already looking forward, the CEO expected that expansion is on the cards for the 2023 Fair with the possibility that it could run over two days.

She said there has been huge interest from Ukrainian nationals in jobs and training. A hub for Ukraine refugees with translators present was set up at the Fair. MORE BELOW PICTURE. 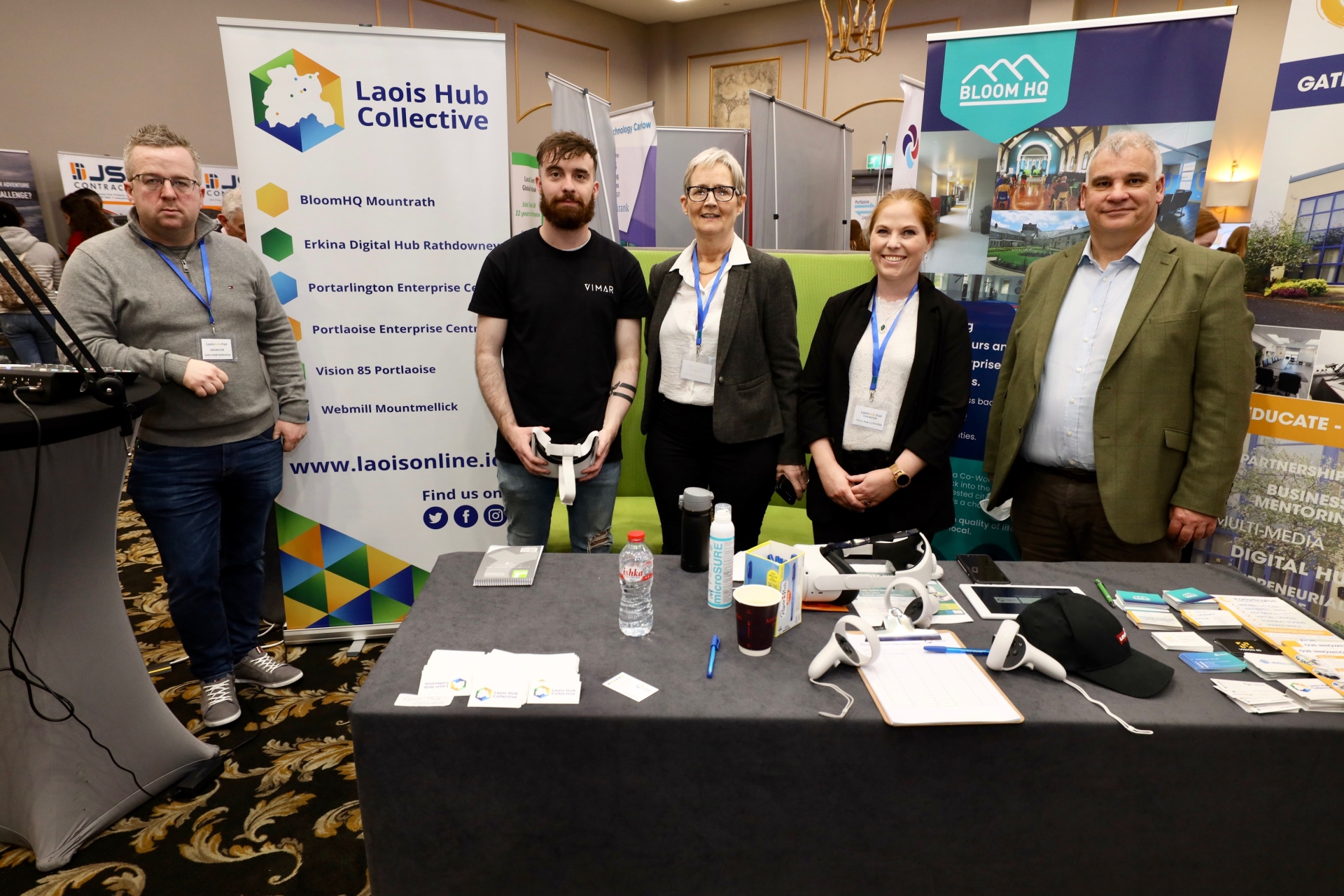 Alison Browne, President of Laois Chamber, was really pleased with the event.

"It has gone better than expected. There has been a great flow of people. We staggered people coming for Covid reasons but there has been a constant flow and a lot of people were booked in for after 6pm to allow people attend without having to take time out from work," she said.

She said the event showcases the variety of jobs in Laois.

"There is an amazing amount of jobs from all kinds of companies. It is ideal for people for people who want to have a work life balance and live after work," she said.

She agreed that the popularity of the event confirms a change in the position of Laois as a place to find work that was first revealed at the 2020 Fair.

She said the big aim and message the Fair sends out is to the commuters leaving Laois each day for work.

"There's 12,000 people going out of Laois each day for work and we are trying to give them options. It is an employees market and we as Laois Chamber believe it is our job to showcase what is on offer in Laois. Each business at the Fair is living proof that you can live an work successfully in Laois and can showcase that," she said.

Like the Chamber's CEO, she was happy with the decision to have a Ukrainian hub on the Laois Chamber stand on the way into the Fair thanking the translators who have stepped in to help.

"They are highly skilled mainly females which is sad of course but they are lovely friendly people but very employable. Any firm that attends the fair will be very luck to have them as an employee," she said.

The President had special thanks for local agencies.

"It would not have been possible for us to run this without the Laois Offaly Education and Training Board and the Laois Local Enterprise Office. We greatly appreciate their support. It is well worth exploring what they have on offer. They are a huge support to the Chamber and workforce in Laois. We are honoured to have them," he said. MORE BELOW PICTURE 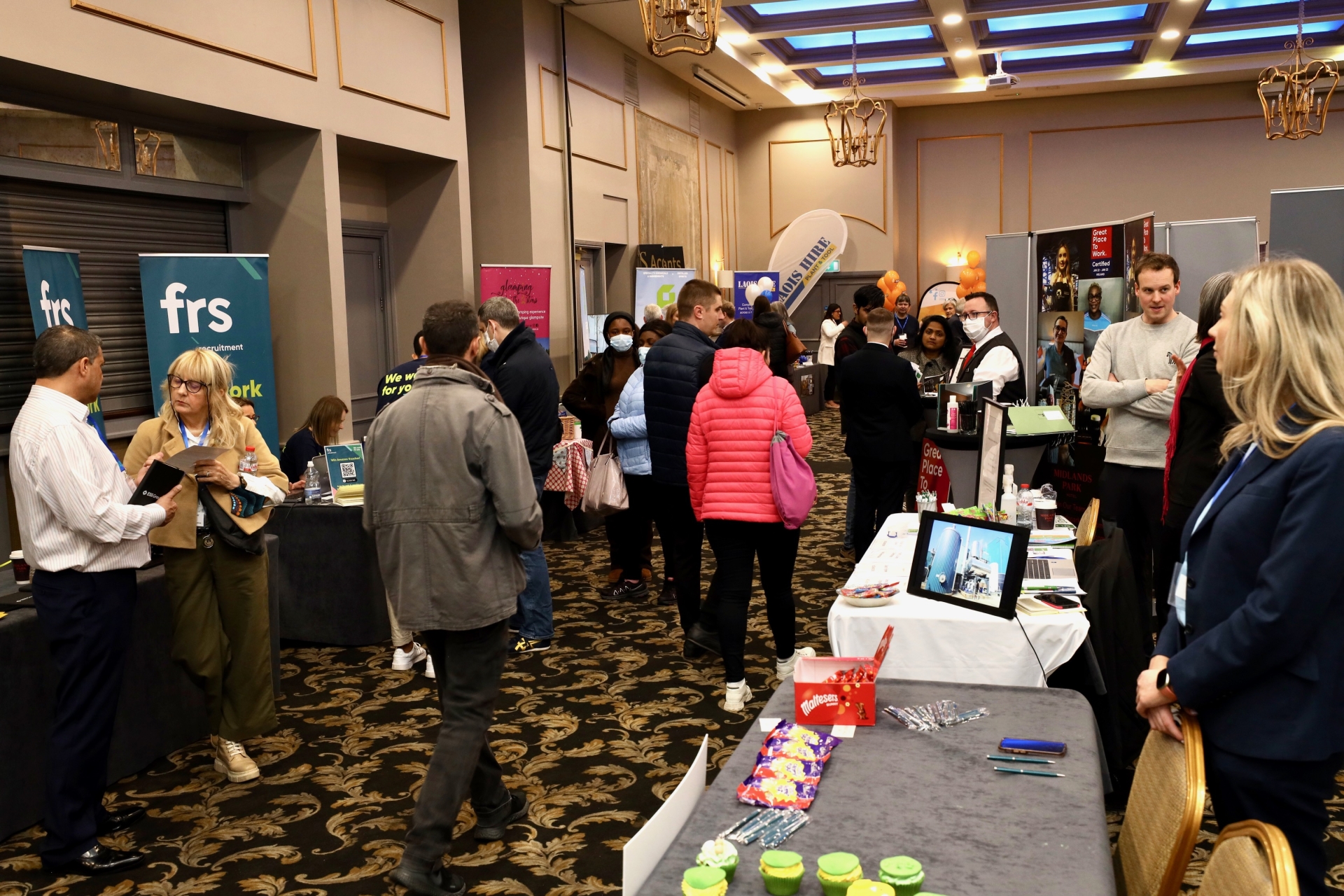 Laois County Council's Chief Executive, John Mulholland, was among those in attendance. He also attended the first jobs fair in February 20 just before the Covid-19 pandemic hit so the holding of the 2022 edition was a sign of a reset. From meeting companies at the fair he felt skill workers in many areas are being recruited.

"There are people looking for all kinds of talents and  those positions are here in Laois," he said.

He said he was impressed by preparedness of companies at the fair to brief potential employees. Mr Mulholland described as remarkable and really positive the number of opportunities there are available in companies.

"It is an endorsement of Laois and the efforts that have gone in over many years that is beginning to bear fruit," he said.

He agreed that the new J15 National Enterprise Park which has been developed by Laois County Council has acted as a magnet to companies. Apart form this he he said established companies are growing in the county while new firms are also setting up which in turn creates new jobs in the services sector.

He felt evidence that there is now momentum growing business in Laois that will create jobs. He added that more improvement can be made.

"I think we are in a good position to develop enterprise and industry further," he said.

He acknowledged that another challenge is making sure that there are new homes for people who wish to work local and make Laois their home.

"It is great to be in that position. You go back the years the pressure release valve was people going away and that is now different," he said.

The CEO concluded by praising the leadership of the business community in pushing the agenda to grow Laois. MORE BELOW PICTURE. 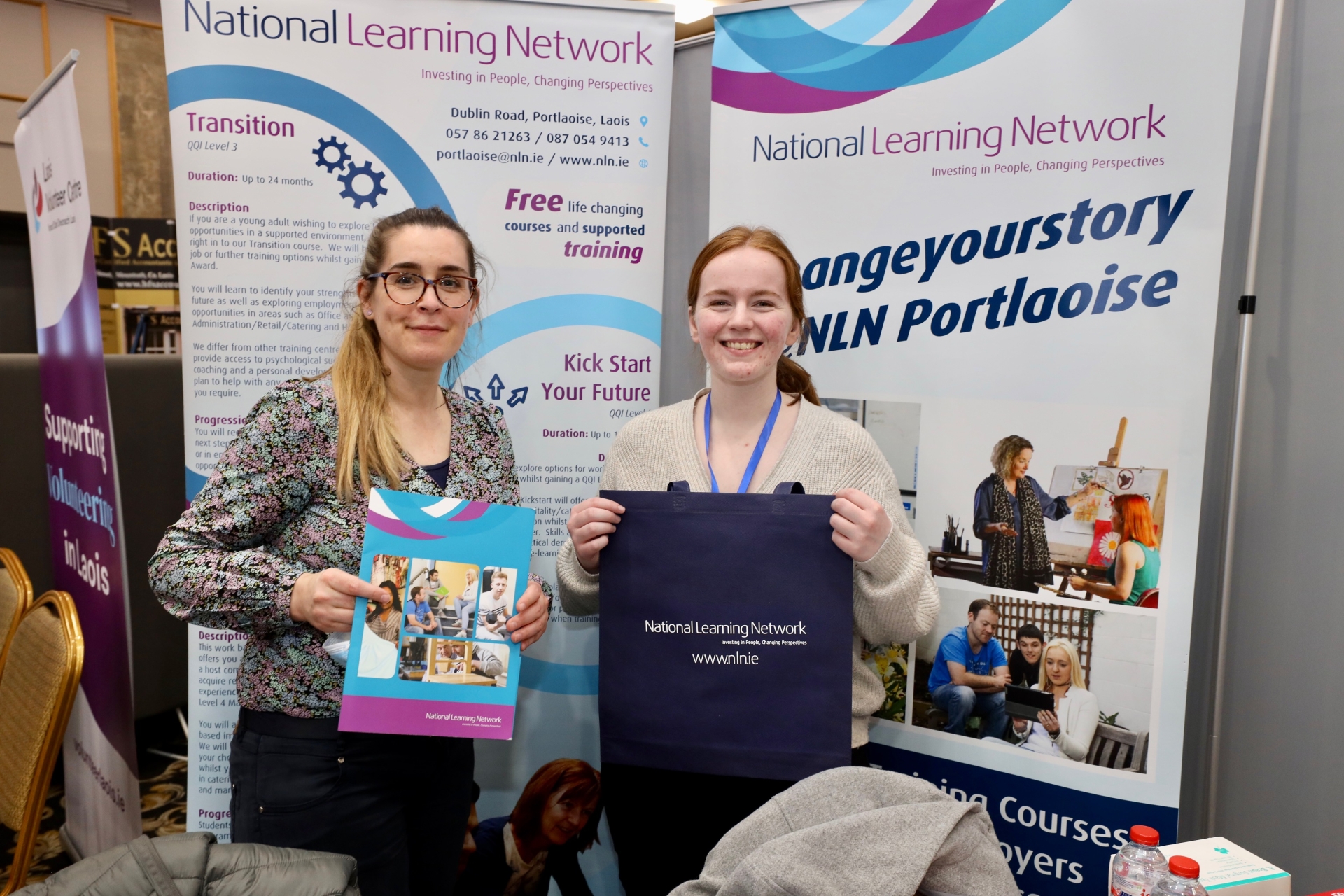 "It is great to see all the Laois based companies. It is clear that there is a real need for skills in the county and there are plenty of jobs on offer," he said.

He said this is a sign that fortunes have changed.

"Compared to 10 years ago when we were losing jobs in Laois we now have jobs to offer," he said.

He said there was something for everyone at the fair. 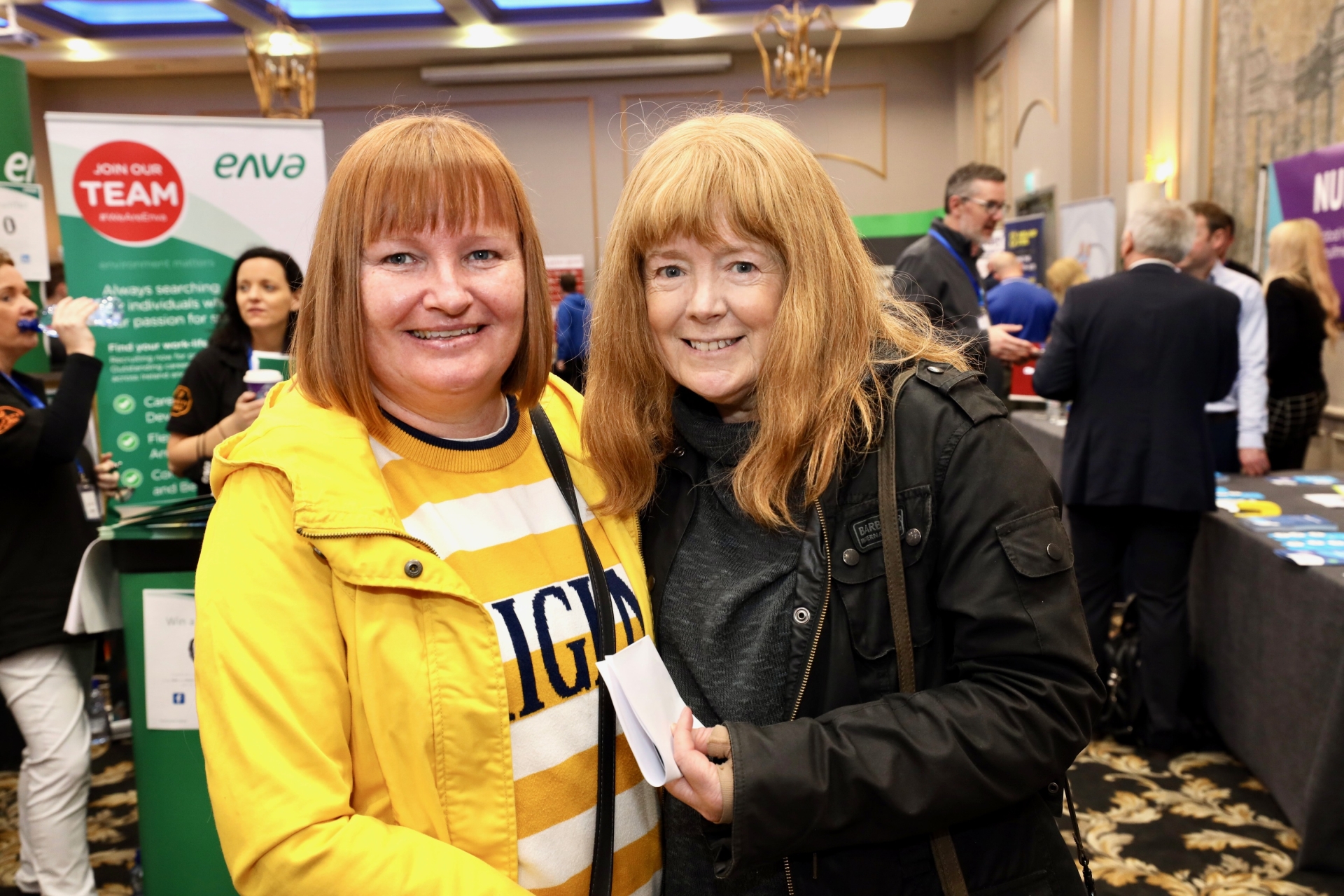