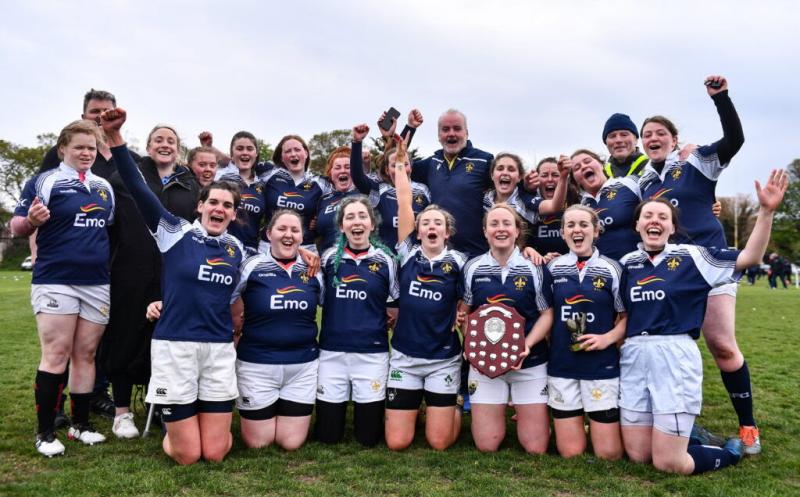 The pack power of Portlaoise was decisive in subduing Wanderers in the Paul Cusack Plate final.

The Laois club pushed the pace in the opening quarter, using their forwards to apply pressure on the fringes.

The reward of penalties led to an attacking lineout deep inside Wanderers 22, the maul turning position into points, the ball transitioning to the back of a well worked maul with hooker Steph Gleeson touching down for 5-0 in the 15th minute.

Tactical kicking by captain Amy O’Callaghan maintained an edge in territory and the scrum was also in control through the drive of the front row of Jorja Mullen, Steph Gleeson and Rosie Palmer setting up a solid attacking platform for the Portlaoise back row.

Wanderers half-backs Jess Kickham and Nicole Landy were keen to bring their backs into the game and it was soon apparent why as Frauke Bosse shot up the left-wing as a warning sign that was not heeded. The next time the ball was moved, centre Bosse had the pace to round the defence for a stunning try, loosehead Pia Kraymer converting in the 24th minute.

A half-break by O’Callaghan was the basis for scrum-half Rachel Murphy to spot a gap at the breakdown and crash over under the posts for Jenny Keegan to convert for 12-7.

The greater weight of pressure was being applied by the Portlaoise pack, Alison Holmes forcing Wanderer's to concede a penalty for not releasing which Keegan duly converted to close the half 15-7 in Portlaoise's favour.

Portlaoise stitched a fine attack together for a great team try, Denica McGrath, Gleeson, O’Callaghan and Becca Mullen all involved in Rosie Palmer’s try, converted by Keegan for 22-7 in the 55th minute after yet another turnover of Wanderer's possession from the Portlaoise back row.

The Wanderers reaction to this adversity was positive, using far less ball to good effect, scrum-half Kickham capitalising on lack of organisational defence at the ruck and getting over for Palmer to convert for 22-14 in the 70th minute.

Despite Wanderer's growing in confidence and maintaining increased possession, moving deep into the  Portlaoise 22 and pushing the pace all the way to the end, they never managed to further breach a disciplined Portlaoise defence driven by experience and relentless tackling.