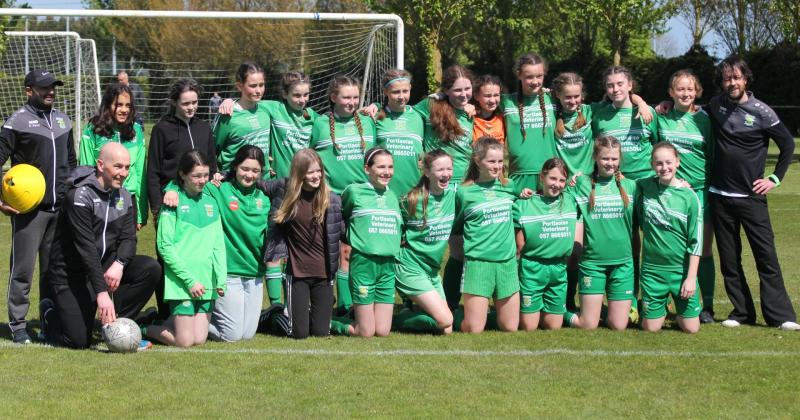 In a first for Portlaoise underage girls’ teams the U14s lined out in the SFAI Cup Semi Final for the first time away to one of the biggest clubs in Irish football, Shelbourne.  A sunny day welcomed the Portlaoise girls back to the capital.

Shelbourne’s home ground was in immaculate condition with a strong breeze blowing from one end.  Portlaoise lined up to play into the breeze in the first half.  Despite the wind and the strong opposition, the team lined up with two up front, showing their attacking intent.

Playing into the breeze Portlaoise still managed to edge the opening exchanges with the back 3 of Holly Murphy, Emily Flynn and Niamh Dundon settling in very quickly.  The Portlaoise midfield battled right from the off.

Shelbourne were determined not to let Portlaoise have everything their own way and they made good use of the breeze to create some good counter attacking chances, but on the odd occasion that they got through Doireann Brennan provided a safe pair of hands and was called upon to produce and excellent save on one occasion, diving low to her left. At the other end Ciara Breslin and Maisie Kerry looked dangerous every time the ball was worked into them.

It remained nil all for the opening 25 minutes, but then Portlaoise made a breakthrough. A through ball was allowed to bounce in the Shelbourne penalty area. Ciara Breslin bravely went up with the Shelbourne keeper and managed to out jump her and her looping header bounced into the empty net.  It was a deserved 1-0 lead, but Portlaoise did not sit back. Both Breslin and Kerry had good chances before the end of the first half.   Saoirse Connell-Carroll put Breslin through, but the Shelbourne keeper came out bravely and made amends for the goal. Maisie Kerry shot just side from the edge of the box, Sally Morgan also had a long range effort saved.

Turning to play with the breeze and an 1-0 advantage had the Portlaoise girls on the front foot from the start of the second half. The centre midfield pairing of Emma Francis and Sally Morgan were prominent from the off.  The Portlaoise management used their bench well to keep things fresh with Lucy Moran, Saoirse Connell-Carroll and Anna Keegan all making great contributions from the bench.

Playing a team of Shelbourne’s quality meant that there could be no let up and the pressure applied by the Portlaoise girls on every Shelbourne kick out and thrown in kept Shels on the back foot.  However, at 1-0 the game was still in the balance.  A very dangerous goal mouth scramble came about as Portlaoise struggled to clear their lines. It looked as if Shelbourne were bound to score, but the ball was finally hooked clear.

Portlaoise pressure mounted down the other end. Maisie Kerry produced an excellent diving save from the Shelbourne keeper.   Shelbourne had their goal mouth scramble that they just about survived.

The vital breakthrough came with a nice combination from the striking pair.  Maisie Kerry broke down the left wing and put a dangerous ball across the edge of the penalty box. The Shelbourne keeper came out to clear her lines, but the high-pressure game being applied by Portlaoise paid off again. Breslin was quick to close the keeper down and got a block on the intended clearance. The ball broke to the right-hand side of the penalty box and Breslin calmly slotted the ball home.

At 2-0 down Shelbourne had a mountain to climb.  However, this Portlaoise team were not going to do them any favours.  The pressure continued, with the wingers Aoibheann Bourke and Leah Brophy chasing and harassing the Shelbourne midfield for every ball.

Chances kept coming too, with Keelin Moore playing some excellent through balls for the front pair to feed off.  The third and final goal put any small hope that Shelbourne had to bed.  The excellent Maisie Kerry picked up the ball outside the Shels box and rifled a shot in the bottom left hand corner of the net, giving the keeper no chance despite her best efforts.

This broke Shels hearts, and it was clear it was going to Portlaoise’s day.  They didn’t slack off and gave the Shel team no hint of encouragement.  Any attacks mounted by Shelbourne was well dealt with by the Portlaoise defence, who were able to use Doireann Brennan’s footballing skills with a couple of back passes that she calmly dealt with.  Portlaoise had another couple of chances to add to the score line it remained 3-0 at the final whistle.

This was another excellent squad performance. The team rotation throughout the game didn’t change the flow of the team with every player doing their jobs and doing them well. A national cup final awaits this group, which is not only well deserved, but can be approached with confidence.