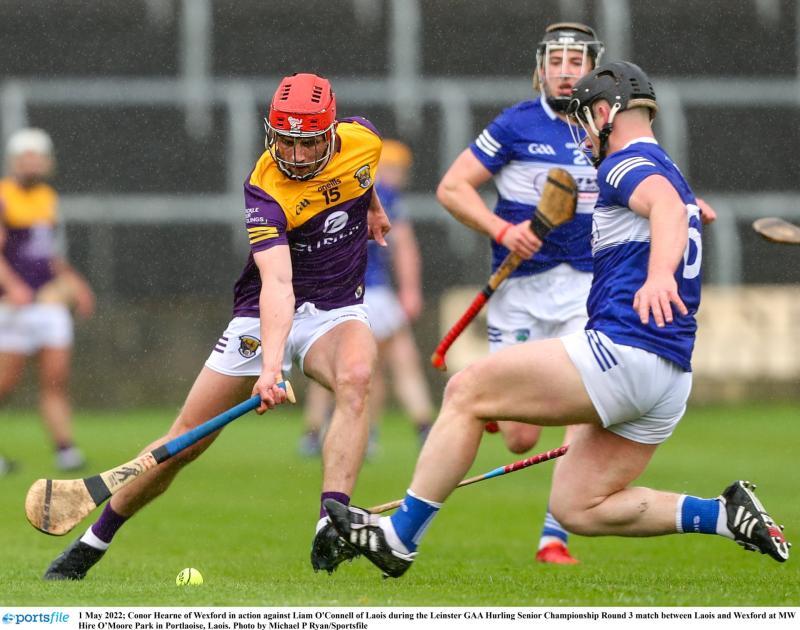 Conor Hearne of Wexford in action against Liam O'Connell of Laois during the Leinster GAA Hurling Senior Championship Round 3 match between Laois and Wexford at MW Hire O’Moore Park in Portlaoise, Lao

With their first two games of this championship away losses to Dublin and Kilkenny respectively, Laois returned home to O’Moore Park on Sunday, with Wexford the challenge this time.

It was another tough day at the office for Cheddar Plunkett’s men. While they were somewhat competitive in the first half, the flood gates opened for Wexford in the second half as they scored five more goals to heap more misery on the Laois Senior hurlers.

Wexford were first out the gate in O’Moore Park, with Rory O’Connor curling over a lovely point from a tight angle. Lee Chin then doubled the away side’s advantage, as Laois hit a couple of wife’s early on.

Laois got on the scoreboard through PJ Scully, as the Borris-Kilcotton native landed a free between the uprights. Chin and Scully traded scores from frees after that, before Wexford built up a healthy advantage.

Chin blasted over a fine score, and then Wexford full-forward, Conor McDonald, got on the scoresheet as he fired over from close-range. Wexford then scored the first goal of the game, and it was McDonald who got it.

PJ Scully settled down Laois with his fourth free, but Wexford looked confident now and Diarmuid O’Keeffe restored their seven-point lead. Scully split the posts once more with a fre after, before Enda Rowland pulled off two massive saves to keep Laois in the contest.

Chin converted a 65’ for Wexford, but Laois hit back through Rowland and Scully frees to cut into the deficit. However, Wexford finished the half well, with the impressive Chin popping over two points, alongside another McDonald point.

Paudie Foley’s free from distance dropped into the Wexford full-forward line. McDonald did brilliantly to catch, before he pretended to shoot, fooling his marker, Seán Downey. McDonald then placed it past Enda Rowland in the Laois goal.

Scully fired over the last score of the half, as Cheddar Plunkett’s men went in trailing 0-7 to 1-10 at half-time.

Wexford started the second half brightly, with Rory O’Connor and Liam Óg McGovern  scoring points for them. Laois got on the scoreboard for the second half through Ryan Mullaney, as he marched up from wing-back to fire over Laois’ first score from play.

However, Wexford were playing all the hurling at this stage. Liam Òg McGovern, Damien Reck and Mathew O’Hanlon all raised white flags for the away team, and things would turn even worse for Laois minutes later.

Laois corner-back, Fiachra C Fennell, received a straight red card after he hauled Rory O’Connor to the ground running through. Wexford continued to pile on the misery, with Chin converting the free and then they got in for a second goal.

Rory O’Connor slid one home from close-range for the Wexford men. Conor Devitt then came up from wing-back to land another point for Wexford, and the ‘Yellowbellies’ were well out of sight at this stage.

Laois then conceded two penalties in the space of a few minutes. For both, Wexford corner-forward, Rory O’Connor, was hauled down inside the square. Mark Fanning marched up from his net on two separate occasions, and fired home each time.

Wexford never let up either, scoring another couple of goals to heap more misery on Cheddar Plunkett’s men. Diarmuid O’Keeffe and substitute Kevin Foley both raised more green flags for Wexford towards the end.

Laois’ only other scores of the second half came from Scully (frees) and substitutes Brandon McGinley and Aidan Corby, as they now must find a way to dust themselves off for the challenge of Galway next week in Portlaoise.