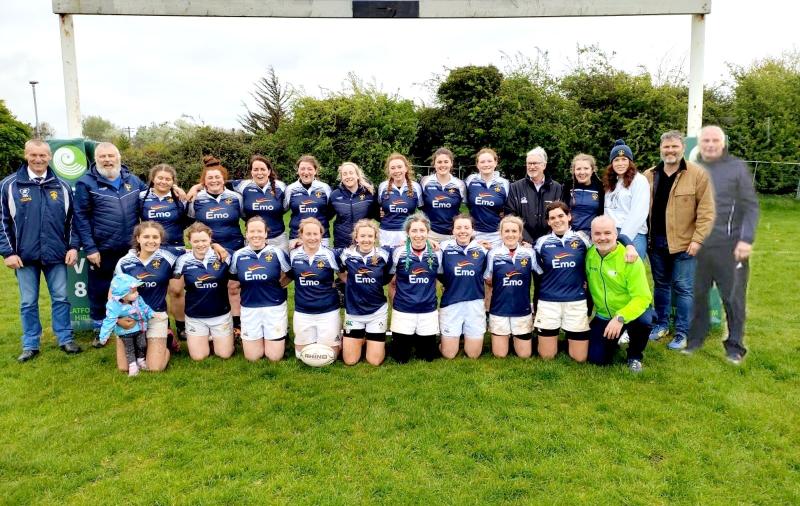 THE Portlaoise RFC Senior Women brought the curtain down on a long and testing season in grand style on Saturday by beating Clontarf in a promotion/relegation shoot out which decided which team would enjoy Leinster League Division 2 status in the 2022/23 season and which team would have to
settle for life in Division 3.

While the scoreboard may suggest an easy victory for Portlaoise the game was anything but with the score standing at 13-0 until the last seven minutes with Clontarf pushing hard to retain their Division 2 status.

The game, hosted by Clondalkin RFC, was played on a warm damp afternoon with little or no wind so conditions were excellent for both clubs. The Portlaoise girls kicked off with the light breeze behind them and were soon into their stride.

They were winning the contact area, forwards like Rosie Palmer and Becca Mullins were making the hard yards close in, and the backs were moving the ball well.

From the start Portlaoise gained ascendancy in the set piece and after 7 minutes they won a line out cleanly. Rachel Mullins drove for the Clontarf line but was stopped just short. A quick recycle resulted in scrum half Rachel Murphy touch down to open the scoring.

Portlaoise continued to dominate but the score remained unchanged for the next 20 minutes as Clontarf's defence proved resolute. Portlaoise enjoyed clear scrum dominance as their powerful front five enjoyed the Division 2 rules being played on the day. This meant there was no metre and a half rule at scrum time and the Portlaoise pack exploited this fully.

However, as half time approached, Clontarf broke out of defence and looked threatening for the first time. They moved the ball across their back line and with the defence stretched Portlaoise's 13 Sandy Keegan went for the intercept, which, if she had held it, would have led to a try. Unfortunately, she failed to hold the pass and she was given a yellow card and 10 minutes in the bin for a deliberate knock down.

Try as they might Clontarf could not breach the Portlaoise line. Then, just before half time, Portlaoise broke out of defence, went down the pitch, and forced a penalty within kicking distance. Down to 14 and with half time beckoning Jenny Keegan stepped up to slot the penalty to leave Portlaoise leading 8–0 at the interval

The second half resumed and once Portlaoise were returned to full strength they were back on the attack. Great inter-play between forwards and backs on their left saw Yvonne Palmer held up short of the line before her sister Rosie rumbled over to leave the score 13-0.

Clontarf, with their Division 2 status slipping away, upped their performance levels and they started to match the Portlaoise pack in the contact area. They managed to settle their scrum and they began to run aggressively at the Portlaoise defence.

The Portlaoise girls have proven on numerous occasion this year that they are more than happy to get into the trenches and battle hard to defend their line and it was no different on this occasion.

It seemed that the game would end at 13–0 until, 10 minutes from the end, Portlaoise managed to get unto the front foot again. They attacked down the left and this time Yvonne Palmer crashed over and with Jenny Keegan converting it was 20-0 at full time.