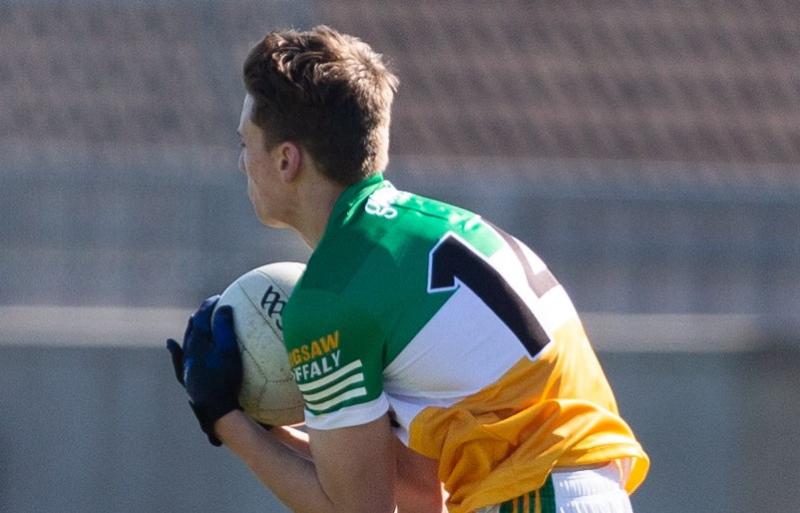 Donal Shirley was excellent in the Offaly attack

The improvement Offaly have made throughout the championship has shocked most observers and they took another significant step forward with this win over Laois in the Leinster Minor Football Championship quarter-final in Tullamore on Wednesday evening.

Anyone who saw Offaly ate alive by Kildare in the first round in O'Connor Park just a short few weeks ago would certainly not have put any money on them making a semi-final – they travel to Parnell Park to play Dublin next Wednesday evening.

They will make that daunting trip with their confidence soaring after two run away wins in the last two weeks.

Offaly were effective in the first half as they stormed into a 1-11 to 1-3 half time lead with the wind on their backs. They upped it more in the second half as they quickly killed off the Laois challenge, pulled completely out of sight and had the luxury of running in subs for the final quarter.

For Laois, it was a bitterly disappointing end to a season that promised much. They asked some questions in the first half but never truly got up to Offaly's pace and intensity and they were showing all the hallmarks of a beaten team from early in the second half.

Offaly played some good football in the first half as they strode into a 1-11 to 1-3 half time lead. It could have been an even bigger lead as they conceded a soft goal and missed a couple of chances as well as hitting the post twice with point shots.

Offaly had a strong wind on their backs in the first half but it was still a sizeable half time lead. They controlled most facets of play with Cillian Bourke and Shane Rigney dominating midfield and the attack showing great pace, on and off the ball.

Luke Kelly was on fire in the first half, firing over four opportunist points and Offaly made a sensational start, scoring 1-4 without reply in the first five minutes. The goal was tapped home by a raiding Padraig McLoughlin broke past the Laois cover in the 5th minute and the shell shocked visitors were sucking air.

They got a lifeline in the sixth minute with a fairly innocuous goal as Ryan Little's punch just crept across the line and was signalled by the umpires after they looked long and hard at it and each other.  Little added a point but Offaly took over again. They got five on the trot to lead by 1-9 to 1-1 after twenty minutes and both sides swapped two points each in the closing ten minutes to give Offaly that eight point halftime lead.

With Laois having the strong wind in the second half, it meant that Offaly still had work to do but they did it in mightily impressive style. They came flying out of the blocks and got three quick fire points to break Laois' fragile morale in the opening five minutes. Laois rallied briefly with points from Aaron Tarpey and David Costello but Offaly went on the rampage again. Donal Shirley floated over a point and then had a goal shot blocked while the rebound from Luke Kelly was also saved. Conor Fox and Shirley again added points before Niall Furlong blasted home a stunning 49th minute goal to make it 2-17 to 1-5.

Offaly added three more points to break the 20 point barrier while sub David Donohue got the final point for Laois in injury time.