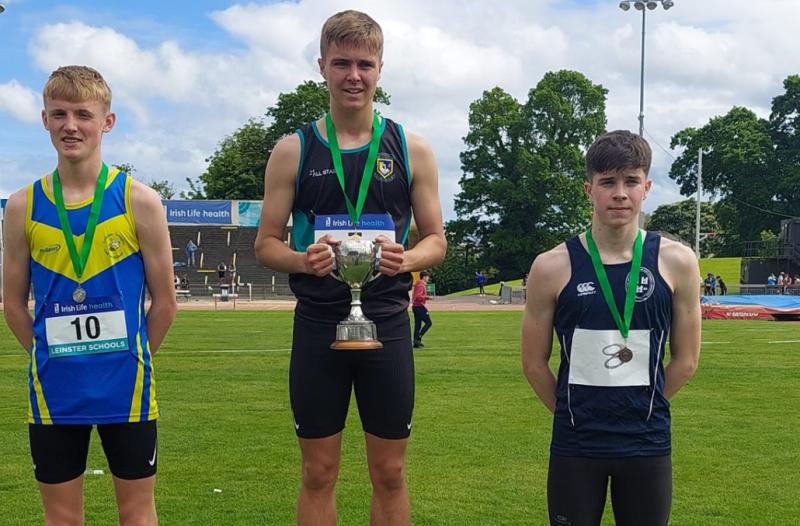 Daena Kealy set a new Pb and Club Record at the Loughborough International Meet on Sunday last. Daena’s leap of 1.78m continues her excellent form from the indoor season.

The jump was also good enough for first place at the Meet. In the Women’s 400m hurdles, Nessa Millet finished in 3rd place in 58.42 seconds. Nessa was also part of the Loughborough Women’s 4 by 400m relay team which finished in 2nd place.

The Leinster Schools took centre stage this week with two action packed days in Santry. Medals are always a premium at these events, with the added bonus of qualifying for the All-Ireland Schools in two weeks’ time also up for grabs.

These events bring the best out of these young athletes with several setting new PB’s. On Wednesday it was the turn of the younger age groups with Minor and Junior events, while the Intermediate and Senior events took place on Saturday. John Delaney ran a fantastic race in the Junior Boys 800m to take second place.

John was engaged in an enthralling battle right up to the home straight where he finished in a new Pb of 2:04. This also safely qualifies John through to the All-Ireland Schools. Rachel Ayers finished just outside the medals in the Junior Girls 1500m where she finished in 4th place in a time of 5:02. In the Junior Boys Walk Cormac Dineen walked his way to a new Pb which saw him finish in 5th place. Grace Heydon set a new Pb in the u.16 Girls Shot Putt where her throw of 8.10 saw her finish in 6th place.

On the second day of action there were several more fine performances. For many the race of the championships took place in the senior boys 1500m where 3 athletes battled the whole way to the line.

The pace was strong throughout, but as they took the bell, Jack Fenlon and two other athletes stepped it up to another gear. They had broken away from the rest of the group with 200 to go and as the entered the final 100 metres the race could have went to any of the three of them. Jack finished in 2nd place in 3:58 with only hundredths of seconds separating each of the three athletes. This also guarantees him safe passage to the All-Ireland School’s.

Aoibhinn McDonald was another athlete who guaranteed her place to the All-Ireland School’s when she took a gold medal in the Intermediate Girls Pole Vault with a best of 2.40m. In the Intermediate Boys 800m, Sean O Sullivan finished in 10th place in 2:19.

Shane Buggy’s throw of 11.56m was good enough for 5th in the Inter Boys Shot Putt. It was also a new Pb for Shane. Katie Baldwin also set a new Pb in the Intermediate Girls Triple Jump with a leap of 9.92m which saw her finish just outside the medals in 4th.

Overall it was a very successful School’s competition for the athletes with Pb’s and medals throughout both days. We wish each of the athletes the very best of luck as they take part in the All-Ireland Schools in Tullamore in two weeks’ time.