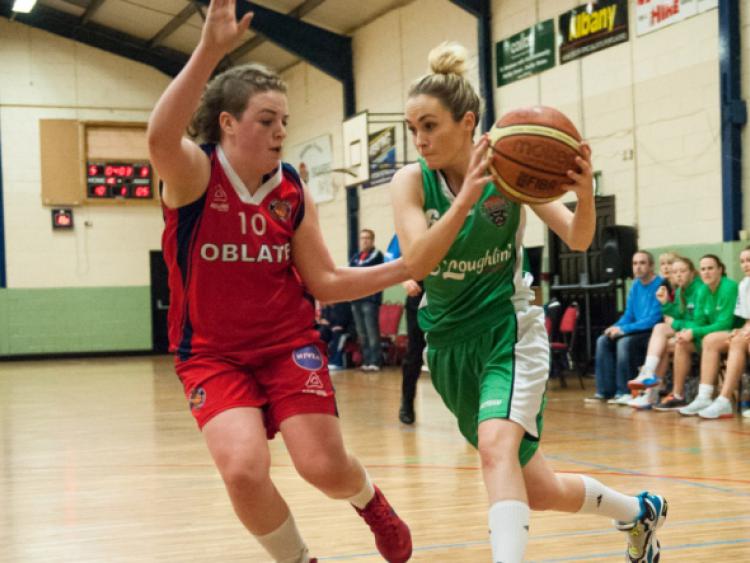 Portlaoise Panthers National League team continued their winning start to the season on Saturday night after withholding a second half comeback from Oblate Dynamos.

Portlaoise Panthers National League team continued their winning start to the season on Saturday night after withholding a second half comeback from Oblate Dynamos.

This win leaves the Panthers ladies top of the table following impressive wins against the two Kerry giants in the previous rounds. The Portlaoise girls dug deep in defence to keep their one point lead intact on the buzzer.

The old cliché of a game of two halves comes to mind straight after the final play in this game where the home side dominated proceedings for the first half while the reigning National Cup champions stormed back in the second half to come agonisingly close to claiming the three points.

Following change of venue issues beyond both team’s controls, the game eventually took off an hour late in St Marys Hall with the home side settling quickly into the game.

Early baskets from Tracey Fallon and Catherine O’Sullivan settled the home side. The Panthers ladies were playing excellent team defence, keeping Oblates to just seven points in the quarter while at the other end Portlaoise were getting great options off their offensive play with Maeve O’Sullivan and Sharon Regan being rewarded for their efforts. The home side took early control and had an eight point lead going into the second quarter.

The second quarter saw Portlaoise play their best quarter of the year dominating the boards and clinically finishing from the free throw line. Sinead Nihill and Nicola Farrell found space inside while Maeve O’Sullivan drained two three pointers. Deirdre Tomlinson brought a new option to the game as she penetrated from the outside forcing the defence into fouling and she finished all four attempts at the line to give Portlaoise a massive half time lead of 39-21.

Oblates changed tactics are half-time and they began to take on the Panthers man-to-man to great effect. Portlaoise responded well to a scoring burst from the visitors and still held a twelve point lead going into the last quarter.

The final quarter and in particular the final seconds will live long in the memory of those in attendance and also the Portlaoise team and the result may well have more importance at the end of the season.

Oblates again came out all guns blazing and for Portlaoise the loss of Sinead Melia to illness at half time was turning out to be a big problem. Oblates hit a great patch and quickly closed the gap to four points.

Oblates continued to bombard the Portlaoise defence and eventually took the lead with just over four minutes left in the game. Every offensive possession was important at this stage and a very important three pointer from game MVP Maeve O’Sullivan put Portlaoise back in front with under two minutes left.

Theresa Harrisson replied for Oblates but with under a minute left Portlaoise’s Nicola Farrell scored what was to turn out to be the last score of the game.

Oblates found themselves in control of the last play of the game and with only one point between the sides, they had the option of taking the last shot of the game to win. An absolutely brilliant defensive performance in the final few seconds saw Portlaoise keep Oblates at bay with Harrisson being forced to take her shot under the board just after the buzzer giving Portlaoise the slenderest of wins.

This win leaves Portlaoise top of the National League table following this important victory and they have now started the season by overturning three loses in these three fixtures in last year’s league. Portlaoise will hope to continue this run of form away to Tralee Imperials next Sunday at 3pm.