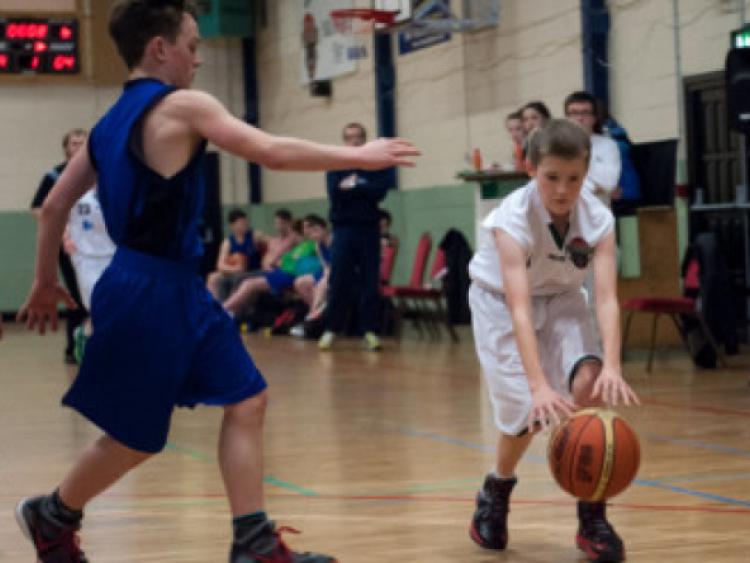 Portlaoise Panthers U-14 boys team played host to the February round of games in the midland league this weekend.

Portlaoise Panthers U-14 boys team played host to the February round of games in the midland league this weekend.

The boys had two games on Sunday last against Athlone and Tullamore and came out with another two big wins. This sets up a winner takes all final game versus Kestrels in the final round of games in Portarlington in March.

The first game of the day saw Portlaoise take on an Athlone side short on numbers which meant the points were already awarded to the home side. This gave the Portlaoise coaching team the chance to give court time to its full panel of players and each one put in a good performance.

While resting co-captain Dylan Phelan in the first game Portlaoise struggled to set up in offence early on. Scores were hard to come by but baskets by Gary Morrissey and Trevor Swayne gave Portlaoise a one point lead after the first.

The second quarter was another low scoring affair with great defence by Stephen McCabe and Ben O’Reilly holding Athlone scoreless throughout. At the other end Mark Vesey and James Phelan were a constant threat scoring a basket each.

The third quarter saw Athlone hold their own as they outscored the home side by two points. Gary Morrissey and Niall Carey got their names on the scoresheet as Portlaoise just did enough to hold their lead.

The final quarter was another disappointing one for Portlaoise as they found it difficult to break down Athlone once again. As the home team worked hard they eventually got their rewards with scores from Rian O’Connell and James Phelan. Portlaoise earned a hard fought seven point victory in this game.

The second game saw Portlaoise take on Tullamore with the home side coming out on top by eighteen points.

In what was a more open game Panthers got the early scores from Rian O’Connell and Dylan Phelan. As the second quarter went on Pierce Bolger Hinds, Darren Moore and James Phelan added great scores.

The second half saw further great play and fast breaks from Darren Moore while Dylan Phelan found his range from beyond the arc. A great basket from Thomas Maher rounded off the quarter.

The final quarter saw Tullamore fight back but the lead was too great. Gary Morrissey continued to add to the lead with Trevor Swayne rounding off the scores for Portlaoise. Currently joint top in both the Midland and Kilkenny leagues The Panthers U-14 team have some very important fixtures in the next few weeks.