Doyle the toast of The Heath after historic win 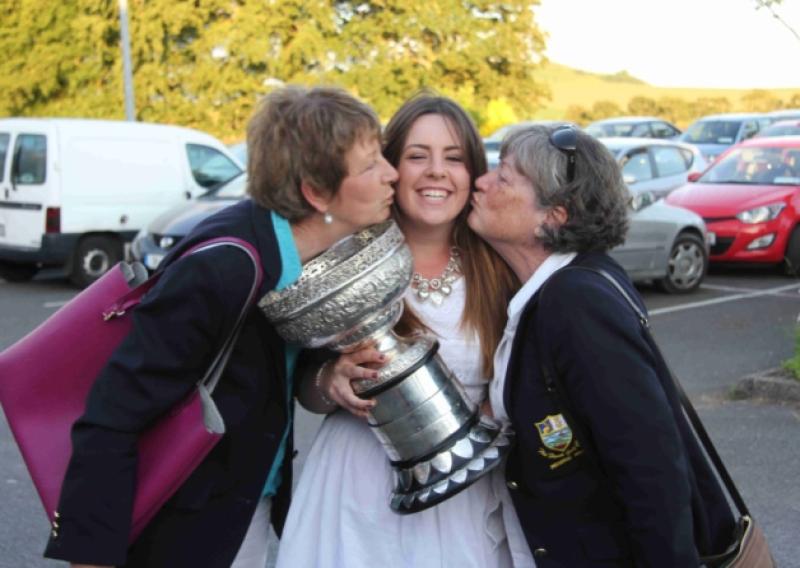 Mary Doyle was the toast of The Heath Golf Club last Wednesday night after she returned home from Enniscrone with the Irish Ladies Close title.

Mary Doyle was the toast of The Heath Golf Club last Wednesday night after she returned home from Enniscrone with the Irish Ladies Close title.

Doyle became the first golfer in the club’s history to win the prestigious title last Tuesday, when she defeated Jessica Carty from Holywood 2&! at the testing Co Sligo links course.

It has capped a remarkable year for the 17 year old, who is also one of the youngest ever winners of the competition.

The long journey to claiming the silverware started last Saturday week, when two rounds of 76 and 77 saw here easily qualify in a tie for fifth. She also got the first trophy for her of the competition, being awarded the Sybil Meharg Trophy for best U-18 Qualifier.

From there, she progressed into the competition proper, and every round was a test of nerve for Doyle.

In Round 1, she beat Carla Reynolds from Seapoint 1up. Next up was former champion Karen Delaney from Carlow, but she was duly dispatched on a score of 3&1.

Her quarter-final opponent was Chloe Ryan from Castletroy, currently second on the Ladies Order of Merit, but in a close battle, Mary won 2&1.

It was another Carlow golfer in the semis, Aedín Murphy, but a repeat of the semi-final score, 2&1 , saw Doyle into the final, with a par putt on the 17th seeing her through.

If the top players save their best play for the big occasion, then the future is certainly bright for Mary Doyle. She was in blistering form from the first tee, going five up after five holes against Carty.

She was -3 thru six holes, but Carty wasn’t going to allow her walk to a national title. It says something about Doyle’s play, however, that Carty could only win holes on birdies, as Doyle maintained her excellent form.

Leading 2up going down the 17th, both players halved the hole in pars, and that was enough to see Doyle claim the trophy.

It is the latest in a long line of accolades for the young golfer, who was only recently named the Scoil Chríost Rí ‘Sporterperson of the Year’. It was through the school she was introduced to the game, and in the space of five years has already achieved a +1 handicap.

She also has an offer of a scholarship from a college in North Carolina, USA, and ultimately hopes to turn professional, but she must first sit the Leavin Cert next year.

That may slow her down ever so slightly when it comes around, but at the moment, there looks like there will be no stopping Mary Doyle.