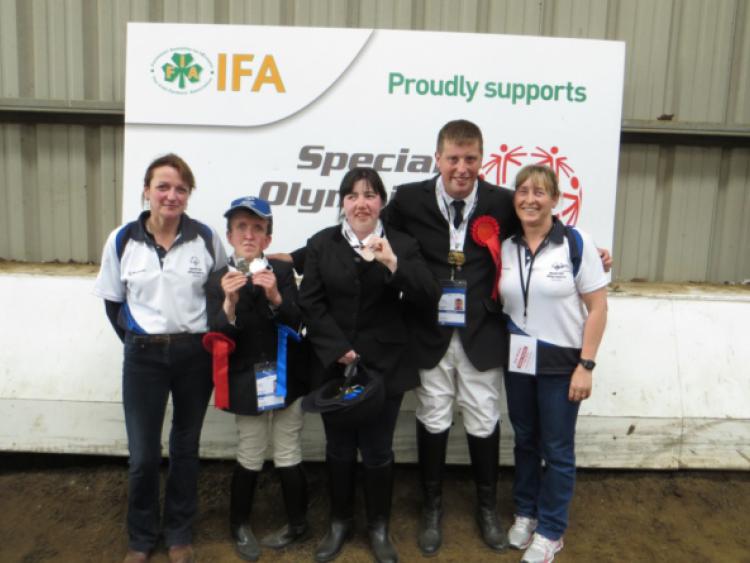 Limerick recently played host to the memorable Special Olympics Ireland Games 2014 and there was success for Laois.

Limerick recently played host to the memorable Special Olympics Ireland Games 2014 and there was success for Laois.

Laois had a strong team of equestrian athletes competing over the weekend at Clonshire Equestrian, Adare. Eimear Furlong (Mountmellick), Alan O Hanlon (Abbeyleix) and Conor MacGearalit (Athy) were among a field of 54 other riders competing in the various disciplines for medal success. The team was co-ordinated by Abbeyleix Acorns group for this year’s games.

Alan O’Hanlon is a proud representative of Dove House, Abbeyleix and did not disappoint taking home two medals this year including a gold. Alan took 1st place in Division 09 - Equestrian Working Trials and 2nd place in Fridays Division 03 - Equestrian Equitation.

The Laois team success is a culmination of efforts from many individuals and organisations. Alan and Eimear are involved in Laois Riding for the Disabled and train at Stradbally Equestrian Centre (Cosby Estate). Roz Telford and Carol Treacy coached the team for this year’s games.

Laois athlete, Anne Foley who usually competes with Laois Riding for the Disabled in Special Olympics Games brought home gold in the Table Tennis event this year, showing her sporting prowess in yet another discipline. Well done Anne.