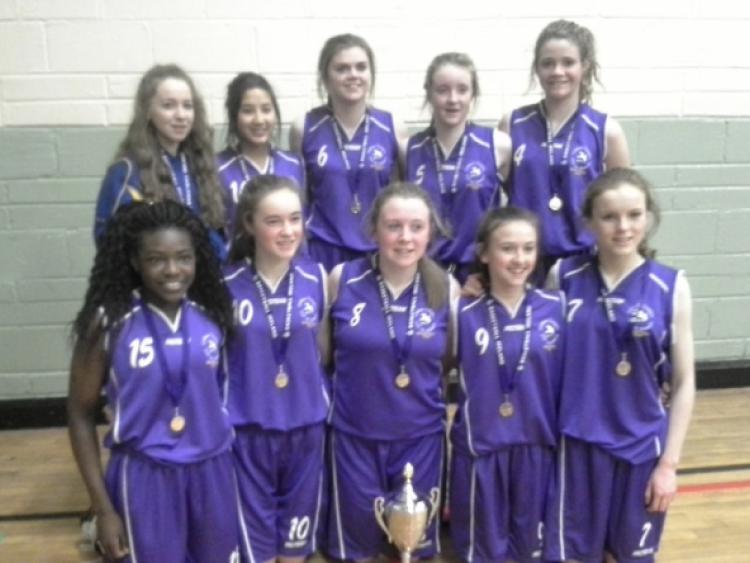 After their successful regional final win, Colaiste Iosagain qualified to play in the All Ireland play-offs.

After their successful regional final win, Colaiste Iosagain qualified to play in the All Ireland play-offs.

They were drawn in a group against the South East winners Bagnealstown and Rathmore from Belfast. Colaiste Iosagain had home advantage and hosted all the games. The prize was an All Ireland semi-final appearance in the National Arena in Tallaght.

As this was the first game of the day ,both teams were nervous and both defences were well on top. Colaiste Iosagain went into an early four point lead and their tight defence was causing the Carlow girls to make mistakes.

Eva Galvin’s defensive display was outstanding forcing many turnovers however Colaiste Iosagain were unable to capitalise on the possession. Carlow’s tall inside player started to cause problems and scored three in a row, at end of first quarter to leave the home team were trailing by four.

In the second quarter, Fiona Dempsey started to win more possession under the boards while Naomi Luttrell was terrorising the Carlow defence with her speed and ball control and coolly slotted away a three pointer towards the buzzer.

Colaiste Iosagain were losing at half-time but they hadn’t performed anywhere near their best.

However in the second-half they threw caution to the wind, changed their tactics and attitude and a new team emerged. They adopted a full court press and caused Carlow to make lots of mistakes.

Erin Murphy and Orlando Mulally got some vital scores, both under the basket and from outside shots. Nicole Havill was superb under the basket bursting up court starting many new attacks. Tinasha worked hard showing her fine athletic qualities. In the end the Colaiste Iosagain girls won deservedly by nine points.

The Belfast side comfortably disposed of the Carlow girls in the second game so this was the crunch game with the winners taking it all.

The Colaiste Iosagain team started quickly out of the blocks and raced into an eight point lead. They continued to use the full court press with the full bench used to rotate players. However the Rathmore girls soon found their rhythm and the game was nip and tuck the whole way with both teams showing huge talent and determination.

Belfast had two key players who we’re causing lots of problems from outside shots and driving at the basket. Colaiste Iosagain went behind for the first time in the game in the third quarter but this is when they showed their true character.

They defended like their lives depended on it. Captain Orla Mulally showed leadership qualities both in offence and defence. She was given a job to man mark Belfast’s main player which she did with aplomb thus reducing their scores.

Naomi Luttrell continued to drive at the defence and drawing fouls. There was nothing in it to the very end but it was Colaiste Iosagain that wanted it more and they can be very proud of their performance.

They now go on to the All Ireland semi final in two weeks.

Colaiste Iosagain made it through to the All Ireland qualifiers when won the B Regional Final in St. Mary’s Hall, Portlaoise. This team have previously won the C All-Ireland title in 2013.

Their opposition was Naas who had previously beaten them in the Second Year Regional Final so it was always going to be a close affair.

In the second quarter, Iosagain started to move the ball quicker and excellent outside shooting by Fiona Dempsey and Tinashae Chapwanya pulled back the lead and at last the girls were starting to play close to their capability.

Some tenacious defending at the top of the key by Naomi Luttrell and Eva Galvin forced Naas into making mistakes. Fiona Dempsey and Nicole Havill were starting to win their defensive rebounding battles . The half time score 16-16 .

Into the third quarter and both teams played man to man defences causing a lot of fouls. Captain Orla Mullaly was really coming into the game at this stage with Naomi Luttrell creating lots of fast breaks with her speed. Portarlington’s fitness was starting to show.

Erin Murphy was using her speed to great effect and scored two vital baskets towards the end, both scores created by Naomi Luttrell.

At the final buzzer the Colaiste Iosagain girls won by 29 points to 23. They created history by winning the first B title in the school for girls since 2000.