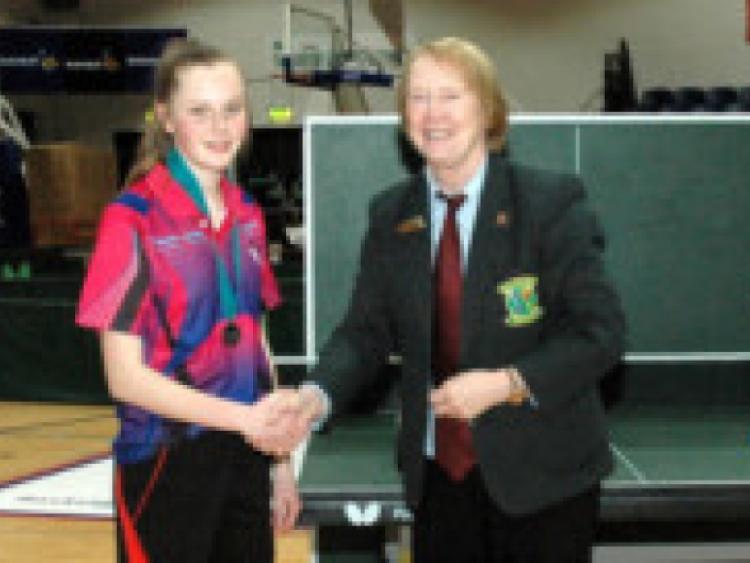 Fourteen-year-old Kate Whelan from Ballyroan travelled to Cardiff, Wales as part of an eight-person squad to represent Ireland in the Junior Six Nations on March 13.

Fourteen-year-old Kate Whelan from Ballyroan travelled to Cardiff, Wales as part of an eight-person squad to represent Ireland in the Junior Six Nations on March 13.

Dylan Grace, who is also a huge asset to Mountrath Table Tennis Club, was also one of the eight selected. The team competition commenced on Friday which saw Ireland take on Guernsey. Guernsey were no match to the Irish talent which resulted in a 5-0 win for both the cadet boys and cadet girls.

The next day saw tough competition for all Irish teams. The fight for medals continued. In the end the Irish cadet girls narrowly lost out to the English girls but beat Scotland 3-2 to claim the silver medal, while the Irish cadet boys secured a bronze medal.

Day Three brought a singles competition with all players fighting for the gold medal. Unfortunately there could only be one winner. Whelan wore her countries name with pride as she cruised to the final where she had victory over Charlotte Bardsley 3-1 crowning her the number one cadet in the Six Nations.

There was no time for rest as Kate returned home from a successful weekend in Wales. With Irish nationals just around the corner, Kate spent hours working on the table to maintain her high quality performance.

On the 21st of March, Kate took to the table in the National Basketball Arena Tallaght to show the crowd her ability. Kate cruised to the semi-final of the U-18 girls competition where she met stiff competition - Katie McGlone from Dublin.

Unfortunately Kate lost the first set 11-1 but she had no fear of what was to follow. Whelan dug deep to take the next set 11-4, showing young McGlone her bouncebackability. The set to follow had the crowds on the edge of their seats as Kate claimed the third set 13-11. Despite a rough start Kate was not giving her opponent an easy semi-final. With many high pace rallies Kate saved herself a spot in the final of the All-Ireland U-18 girls.

Whelan faced Cavan girl Hannah Lynch-Dawson in the final. After formerly beating Hannah in previous tournaments Kate was confident in her game. Unfortunately, Hannah took the match 3-1. As Kate did her town, club and nation proud she collected her silver medal with huge pride.

Also claiming silverware was Dylan Grace who claimed a silver medal in the U-15 boys category and young Paddy Vaughan in the Junior Para Category and Mixed Category.