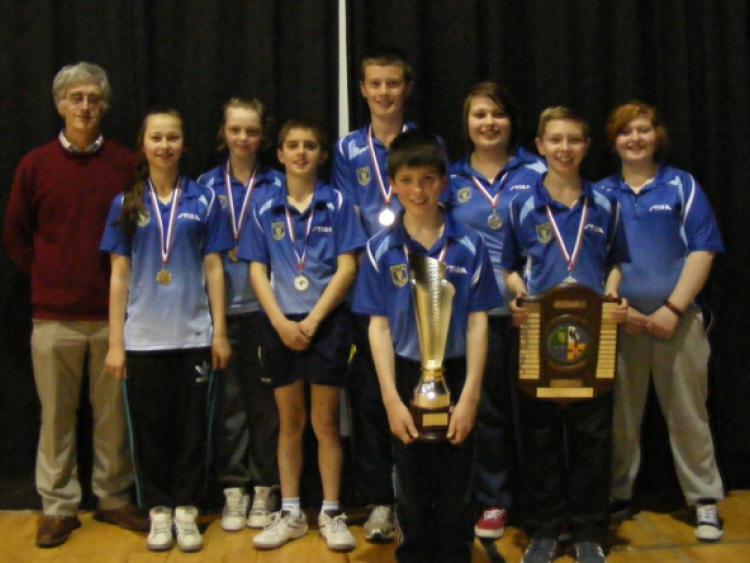 Dynamic performances by many young table tennis players from the midlands carried Leinster to an incredible win in this season’s Inter-Provincials.

Dynamic performances by many young table tennis players from the midlands carried Leinster to an incredible win in this season’s Inter-Provincials.

The event was staged in Breighy Sports Center, Castlebar recently and featured a host of the best young players from Ulster, Munster, Leinster and Connaught doing battle.

Downey, Grace and Vaughan along with Jack Hannon of Carlow were the Leinster U-12 team who won gold. The Leinster U-12 Girls who also won gold and the team included Jessie Hayes and Leanne Delaney who both were in the form of their lives and delivered big time. The U-13 National champion Kate Whelan was unable to take her place on the team due to other commitments.

Jestin, who never dropped a set over the weekend, was part of the U-14 Boys team that took gold.

Amylou Hayes playing her sixth consecutive year for Leinster was also in supreme form at U-17 where the girls team took silver. Katie Hayes was also in solid form and took silver as part of the U-14 girls team.

As the event reached its conclusion, there was the annual award for the player of the event. This year’s winner was Paddy Vaughan who collected the Colm Slevin Trophy. Paddy, who is also a Para player, is an incredible talent with tremendous commitment and is an inspiration to many who play table tennis.

This really put the icing on the cake for the great contribution given to the Leinster team by all who hone their skills at Mountrath Table Tennis Club. Without them the Province would not be in a position to reach the golden heights they accomplished in the Inter-pros of 2013.