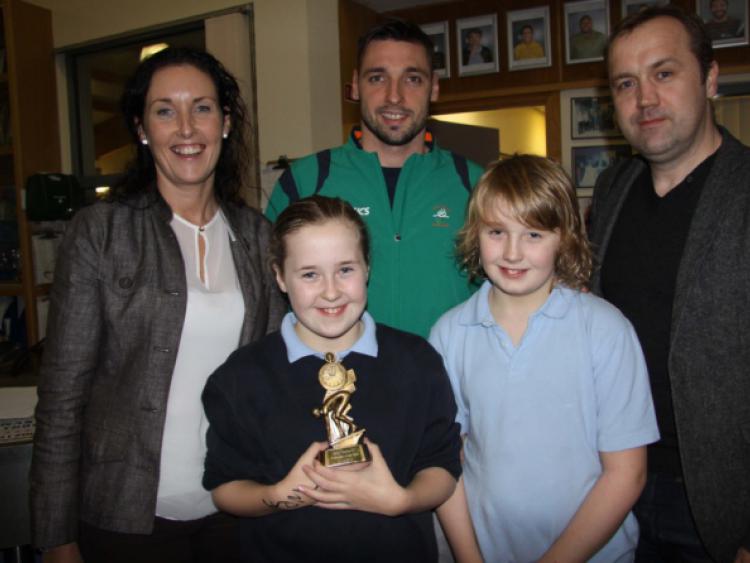 Earlier this year the Dublin based swimmer won a bronze medal in the breaststroke final at the World Cup meet in Eindhoven, where he also set two new Irish records for the 50m breaststroke and 50m butterfly, to add to the five other national records he set. He represented Ireland at the London Olympics in Breast Stroke and Freestyle events.

These lofty achievements didn’t prevent the affable athlete from getting into the pool with swimmers ranging in age from six to sixteen to pass on some very valuable training tips. The best advice he gave, according to Mathew Doyle, was to “develop a feel for the water” and to “constantly work on streamlining”.

As the training session came to a close, A-squad boys Eoin Donoghue, Christopher Carew, Thomas Martin and Ryan Flynn took on the challenge of swimming a breaststroke length against him. “Swimmimg with an Olympian! Cool!” said Ryan Flynn.

Before presenting club awards, Barry patiently autographed everything from swim-hats to Beats, and chatted freely to parents and club members alike.

To much applause Mr Murphy also launched the Laois Marlins website - www.laoismarlins.ie , which was designed by former Marlins member and youth coach Benn Hogan, who was represented on the night by his Mum Mary and sister Eada. The visit was sponsored by Breda Kenny and Vivienne Carroll (Judge Roy Beans Newbridge).