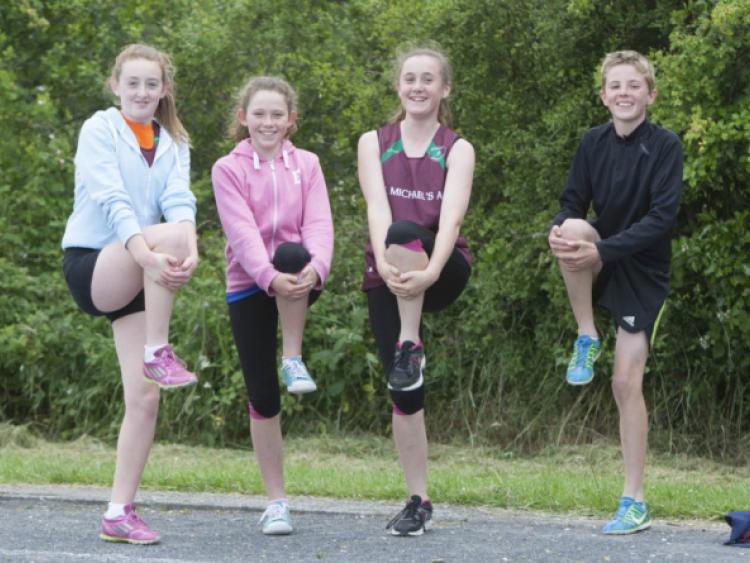 The weather helped to attract a larger than normal crowd for what is essentially the Development Track event of the season.

There were heats needed for most of the sprint events and there were some great performances by the younger athletes to make it to their respective finals. With John Scully organising the start line, the races flowed seamlessly from one age group to the next giving the spectators a lot to cheer about as the evening progressed. Alice Kerins of ST Michaels AC won the U-9 60m impressively and Daniel Boland took the Boys U-9 60m in style also.

Oughaval AC had a lot of winners on the night, Sasha Kemmy and Jenny O’Connor Murphy won multiple medals in their age groups. Mountmellick AC also had a lot of good performance bringing home 53 medals in total. Good performances from Niall Bracken and Kiahara Dempsey helped with their tally.

One of the races of the night was the U-12 boys 600m Won by Josh Hogan of Ballyfin AC and also had Charlie Hackett of St Michaels storming the last 100m to take third place on the line. The Seniors were not to be out done with great running from Ballyroan athletes Avril Deegan and Tom Dunne to take the 800m.

The facilities in St Abbans were excellent on the night which lead to some good performance in the field event. St Abbans did the double in the Senior long jump with wins for Conor Daly and Sarah Buggy. Chloe Keenan of Emo Rath took the U-11 long jump and Eimear Corri of Portlaoise also won her second gold in the long jump

The high jump saw good performances from Eoin Keenan of Emo Rath AC and a third gold for Eimear Corri. The turbo javelin suffered a little with the breeze but the kids still performed well with both Cora and Lucy Goode winning Gold for Ballyfin AC.