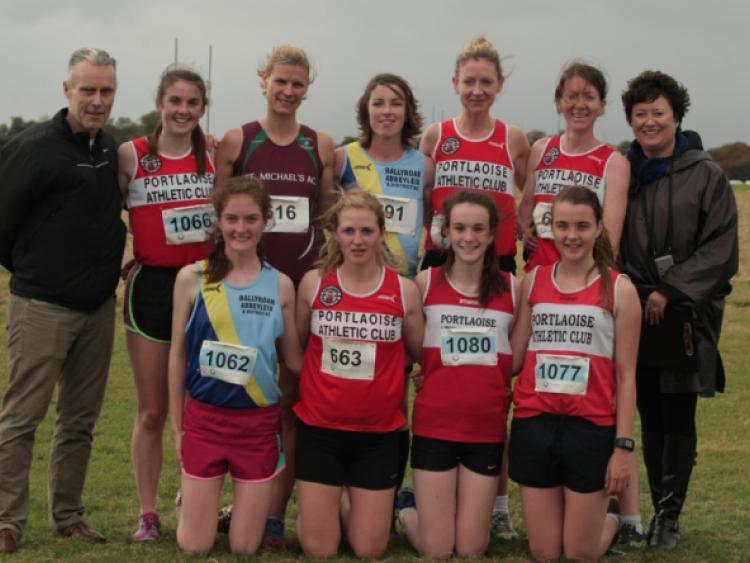 The first serious cross-country competition of the Irish racing calendar took place in the Phoenix Park on Sunday 19th October where over 350 athletes took part.

The first serious cross-country competition of the Irish racing calendar took place in the Phoenix Park on Sunday 19th October where over 350 athletes took part.

Former Double European Cross Country Champion Fionnuala Britton was the star attraction of the day, and duly took care of business in a clean and efficient manner finishing over a minute ahead of her nearest rivals in the 8K event.

From a Laois perspective the performances of a special team of female athletes was another, no less significant, star turn. There were a number of high placings and many outstanding performances in a race with many of Irelands best athletes.

In the junior (U-19) 4km race, 15 year old Avril Deegan from Ballyroan Abbeyleix and District AC competed magnificently to finish in fourth place belying her tender years. Just two years after starting to run, the Cullohill youngster is now in the crosshairs of the Irish national team selectors.

A special word must go to Paula Grant, Portlaoise AC, who ran one of the best races of her life to earn selection on the irish team for the upcoming British and Irish Masters international in Nottingham next month. This is a wonderful honour for a woman and who only took up running a few short years ago.

These top performing runners are just some of a group of Laois based athletes heading to the Kingdom of Bahrain in the Middle East this week, for the Bahrain Marathon Relay. Over 150 teams, made up of athletes from many nationalities, will descend on Bahrain in the coming days as they fine tune their preparations for the ‘marathon relay’ on Friday 31st October.

The BMR (Bahrain Marathon Relay) event is the ultimate team event, everyone needs one another, and every second counts.

This small group of seven runners from athletic clubs in Laois have been put together by Ian and Teresa Wilson of Nuparc Wellness, and they are confident of a good performance.

The race starts at 10am at the Bahrain International Circuit, home of the Bahrain Grand Prix, and with temperatures soaring towards the high 30s by early afternoon, this will be a race like no other for the athletes, who range in age from 15 year old Avril Deegan, to 40 year old mum of four Pippa Hackett. “We expect them to complete the 50km event in a little under three hours, and believe me it will be an exhausting challenge, given the desert like conditions and high heat and humidity; totally different conditions from the Phoenix Park last Sunday” says Teresa Wilson.

The Wilsons spent over 30 years working in Saudi Arabia, and while there, set up a very unique training programme. They had a production line of many athletes, and through their positive coaching methods, trained runners up to both Olympic and World Championship level. Teresa hails from Stillorgan in Dublin, and Ian is originally from Sunderland in the north east of England and upon retirement they decided to settle in Laois at the end of 2013.

Sponsorship for the trip has been organised by the Wilson’s through companies they have developed long-term relationships with through the sport of athletics over many years in the Middle East.