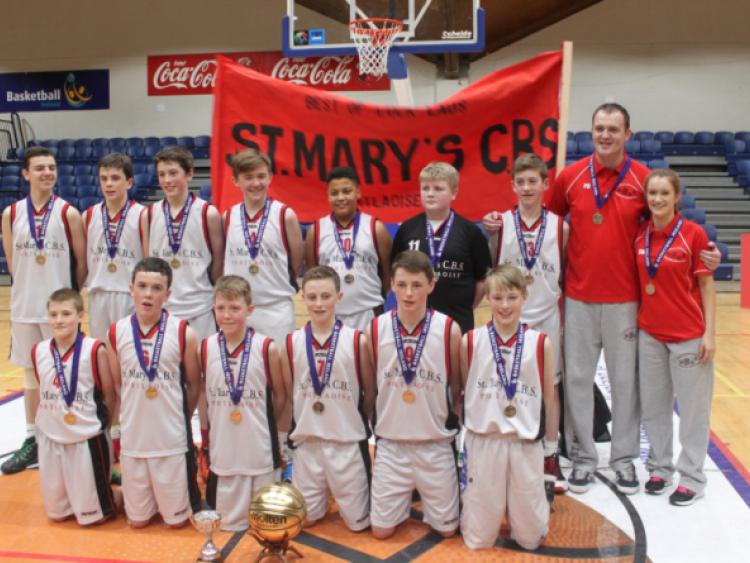 St Mary’s CBS U-14 team travelled to the National Basketball Arena last Tallaght last Tuesday to compete in the All Ireland Boys B semi final and final.

St Mary’s CBS U-14 team travelled to the National Basketball Arena last Tallaght last Tuesday to compete in the All Ireland Boys B semi final and final.

The team, which was made up of both first and second year players, was coached by Peter Duignan and Sarah Williams and captained by Rian O’Connell.

The Portlaoise side took on St Mary’s College from Galway in the semi final. The Portlaoise school opened up a 14-8 lead by the end of the first quarter and had increased their lead to nine by half-time.

The Galway side clawed the deficit back to six by the end of the third quarter but the fourth quarter was dominated by Portlaoise as they pulled away to win 57-33.

St. Mary’s CBS returned to the court later that afternoon to face Our Lady’s Secondary School from Castleblaney.

Starting the same five the Portlaoise side got stuck in, playing a quick passing game which worked exactly as coach Peter Duignan had hoped it would.

Rian O’Connell and Trevor Swayne again working hard in defence to feed the ball back out to Dillon Phelan who effortlessly passed the Castleblaney players, carrying the ball straight to the basket. All five players fought hard to allow Portlaoise take a comfortable fourteen point lead heading into the second quarter.

James Phelan and Ben O’Reilly were again paired up with Stephen McCabe giving screen after screen to allow the post players through to score. Niall Carey worked tirelessly under the basket beating the Castleblaney defence before firing the ball back up to the basket. With James Phelan and Ben O’Reilly stepping up to some taller defenders, the ball fell back out to Colm Byrne for the outside shot on a lot of attacks. As the buzzer sounded for half time and the crowds roared the Portlaoise side ended the first half of the game leading 25-11.

With the cup in their sights and the crowd in their ears the home team took to the court all guns blazing in the third quarter. Again each player gave their all and supported one another with Trevor Swayne taking the ball through the defence and dropping it into O’Connell who hit the target time after time. Dillon Phelan weaved the ball up and down the court with James Phelan following close behind for back up.

With a comfortable lead of nine points heading into the final quarter Portlaoise were able to make five changes allowing Ben O’Reilly return to the court and set up attacks for Leon Holland and Ben Conroy. With Sam Wynne and Jordan Ikpomwen inside for Portlaoise, the Castleblaney defence were rocked with both players taking rebounds.

Holland and Conroy were set up for outside shots on two occasions with quick passes from Ben O’Reilly. The buzzer sounded and the arena was on their feet as the game ended St. Mary’s CBS 46 and Castleblaney 33.

With players and coaches ecstatic the supporter’s bodhrán and chants continued as Rian O’Connell lifted the cup for the Portlaoise side.

Dillon Phelan was presented with the gold basketball as MVP. The team performed outstanding overall and blew onlookers away with their sportsmanship and team etiquette throughout the games.

It was an exceptional win for the young team who have worked tirelessly towards this goal leaving the majority of players with two All Ireland medals within the week.

Huge thanks go out to the supporters who travelled to the games and kept the arena hopping throughout the day. Thanks also to St. Mary’s CBS parents council for sponsoring the teams gear for the event. St. Mary’s CBS first year team are competing in the All Ireland quarter finals next, at home in the school on Monday, April 20 and the following Monday will see the schools second year team battle for their place in the finals. All support on both days would be greatly appreciated by players and coaches.