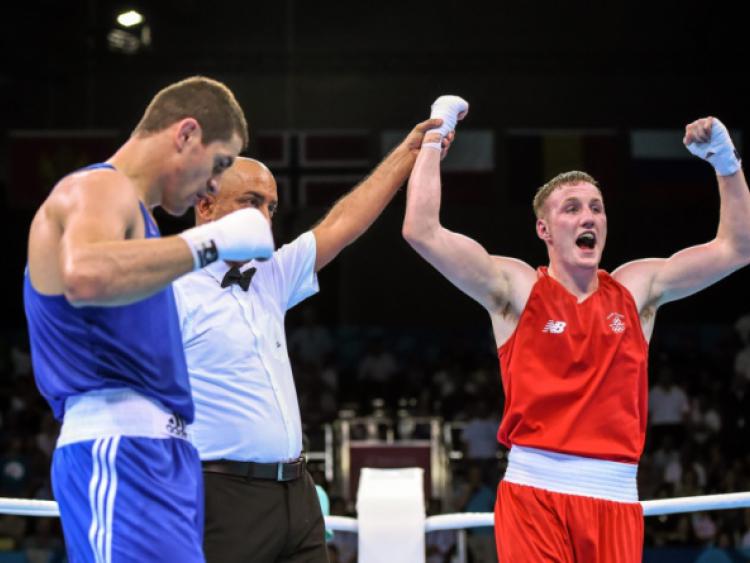 Portlaoise was toasting a European champion over the weekend after Michael O’Reilly claimed gold at the European Games in Baku, Azerbaijan.

Portlaoise was toasting a European champion over the weekend after Michael O’Reilly claimed gold at the European Games in Baku, Azerbaijan.

O’Reilly won the gold medal in the middleweight division on Saturday, stunning home favourite Xaybula Musalov to secure the title.

It now sets him up for a tilt at qualifying for the Olympic Games in Rio de Janeiro next year, and firmly establishes him as one of Ireland’s top young boxers.

Speaking after the fight, O’Reilly was delighted with the win, which gets him one step closer to his Olympic dream. “”It gives me the chance to go to the world championships (in Doha in October) and that will give me the chance to qualify for the Olympic Games and that will be my dream come true, to get there.”

As for the fight he had just won, he knew he would have to be disciplined to defeat the home favourite. “It was very, very hard to do, that’s why I had to stick to what I did and do it in style, because if not they would have given it to him.

“It was a very tough fight. I knew he was going to be a strong opponent, coming forward, trying to hurt me. I just stuck to the tactics - hit and not get hit, make him miss - and that’s what I did and that’s what won me the fight.

“I’m just a confident chap. I was here for one reason - to get the gold medal.

I got it now and I’m over the moon. It’s very, very special to me.

“I’m here as underdog. I knew there were a lot bigger and stronger lads than me here, but that just makes me more confident to get in there.”

While there were celebrations over in Baku, the town of Portlaoise was also rocking after the win, and no one was happier than Pat Ryan, his coach at Portlaoise Boxing Club.

Speaking yesterday morning, Ryan paid tribute to O’Reilly for claiming the win. “He had studied the other fighter well. The most important thing for Michael is to stick to what he’s good at, and that’s sticking and moving, finding angles and landing punches from mid to long range.”

Ryan also admitted that he was delighted with the way O’Reilly represented both the club and the area. “The ethos of the club is that we are a centre of excellence, and a boxing academy.

“To be a world class athlete you need to train your mind as well as everything else, because you need your brain functioning at the highest level. That’s why Michael has been in adult education, getting ready for life, and that’s equally impressive.

“Even the way he carried himself, he was very humble after the decision, and he’s a very cool and calm individual, and you can see that in how he boxes. We are representing the parish as well, Monsignor Byrne has helped us a lot, as have Laois County Council, and hopefully this will help us to kick on to the next level.”

It is O’Reilly’s fourth European medal, having won a schoolboy gold in 2007, a silver in 2011, and another silver in 2014, as well as winning gold at the prestigious Brandenburg Cup in his youth.

He will now target the Wold Championships in Doha, Qatar in October, where Ryan hopes he will get a seeded draw having won gold at the weekend. If he can claim two wins there, he should then hopefully have done enough to qualify for the Olympics in 2016.